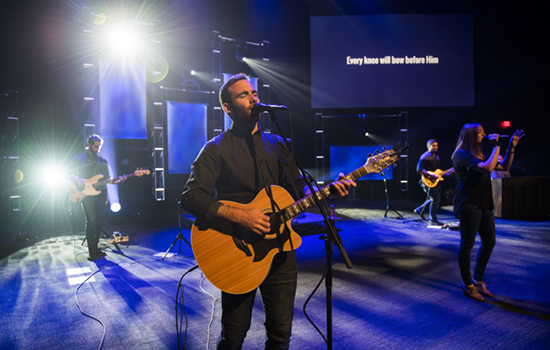 “The heart of the worship degree is to prepare students to serve the body of Christ, and this competition challenges our students to write theologically sound, musically compelling songs for congregations,” said Dr. Roger O’Neel, director of Cedarville’s worship program.


"It is our goal to give God alone the glory for the talents that he has entrusted to us as well as be good stewards and use these talents to serve the body of Christ."

The worship department sought out an internationally renowned, award-winning panel of judges for the 2017 competition. The songs will be judged by Laura Story, Rick Lee James and Mark Harris, all three of whom are accomplished songwriters.

Story wrote the No. 1 worship hit “Indescribable,” which Chris Tomlin recorded in 2004, and her 2008 national debut won a Dove Award for Inspirational Album of the Year. She also earned two consecutive nominations for Female Vocalist of the Year. She serves on staff at Perimeter Church in Atlanta, Georgia, and is an artist with INO Records.

Harris is a former member of 4Him, winner of eight Dove Awards and author of 24 No. 1 hits. He joined the staff at Gateway Church in Southlake, Texas, in 2013 where he serves as lead worship pastor. His project “Walls,” by Gateway Worship, was the No. 1 album on Billboard’s Christian chart in October 2015. He will be on campus leading worship with Gateway and teaching at Cedarville University’s Worship 4:24 Conference in January 2017.

James has more than 15 years of experience in ministry as a worship leader, singer, songwriter, preacher, author and podcast host. His latest album was released March 2016 and has been featured in CCLI, CCM Magazine, Worship Leader Magazine and other national spotlights.

The contest entry deadline is Wednesday, February 15, 2017. Students must submit original songs that are intended for congregations for the competition and include an mp3 file for an audio demo as well as a pdf file of the chord chart or lead sheet. Submissions should be sent either by campus mail or electronically to Susan Plemons, assistant professor of worship (susanplemons@cedarville.edu). The winners will be announced in March and will receive $300 for first place, $200 for second place and $100 for third place.

“Soli Deo Gloria” is the motto of the music and worship department,” said Plemons. “It is our goal to give God alone the glory for the talents that he has entrusted to us as well as be good stewards and use these talents to serve the body of Christ.”