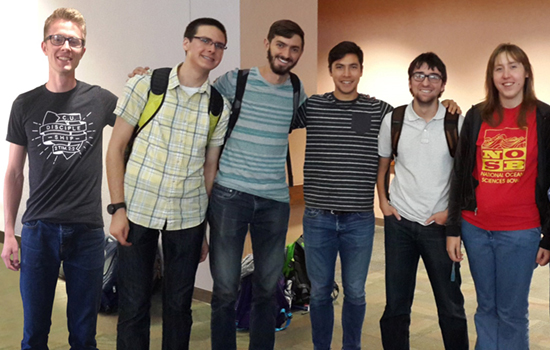 Tuesday, March 14, 2017
A Cedarville computer science senior design team is creating a smart phone app that can transform the work of foreign language translators and missionaries. The student-led team is working with Jungle Aviation and Radio Services (JAARS), an organization dedicated to spreading the Gospel through transportation and media, and missionary Robin Rempel to develop the Bible Story Producer app.

The prototype for the app is already being tested at JAARS, and the students are expected to complete version 1.0 of the app in April.


"The students are really dedicated because they are all missions-minded and can see the eternal significance in this project."

The app will allow minority language speakers to orally translate Bible stories. It first shows a still-picture video of a Bible story with a base language voiceover. Then a native speaker can record a translation to create a new voiceover for the video in their people’s language.

“We wanted to create a tool that enables and empowers local people, with little outside training, with good Bible content so they can understand the Gospel,” said Rempel.

The best part? Cedarville students are working to make this idea possible on Android phones. “Phones are the device of choice for people in remote areas, and this app will turn the phone into the translation table, recording studio and distribution system for Bible translation,” said Rempel.

Seth Hamman, Ph.D., assistant professor of computer science at Cedarville University, reached out to JAARS when he was looking for projects for his students’ annual capstone course. He got connected with Rempel, who had the idea for the Bible Story Producer app.

“The students are really dedicated because they are all missions-minded and can see the eternal significance in this project,” said Hamman.

“Right now, it’s missionaries who have to work on translation, but this app can get more people involved,” said student Noah Bragg. The app will also make Bible translation and distribution quicker and more effective.