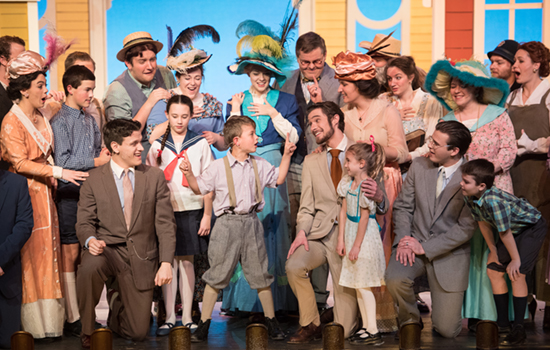 Rebecca Baker, associate professor of theatre, directed “The Music Man,” in her last production as a professor at Cedarville. She plans to retire at the end of the academic year.

"What I love about Cedarville theatre is working with students, celebrating the gifts of others and telling good stories that invite us to ask honest questions about life."

“This show had so many things I love about working in theatre,” said Baker. “I loved working with the large cast and the children from the community. This cast truly became like a family. Both cast and crew worked together seamlessly. It was a wonderful, supportive group to work with.”

Baker directed Cedarville’s first production of “The Music Man” in 1977, when senior professor of history Murray Murdoch’s two sons were in the production. Mark Murdoch played Winthrop while his brother, Jim, played one of the boys in town.

“One of the differences in the two productions of ‘The Music Man,’ was the incredible amount of collaboration we were able to achieve this time around,” said Baker.

“What I love about Cedarville theatre is working with students, celebrating the gifts of others and telling good stories that invite us to ask honest questions about life,” said Baker. “’The Music Man’ had those elements and that contributed to its success.”