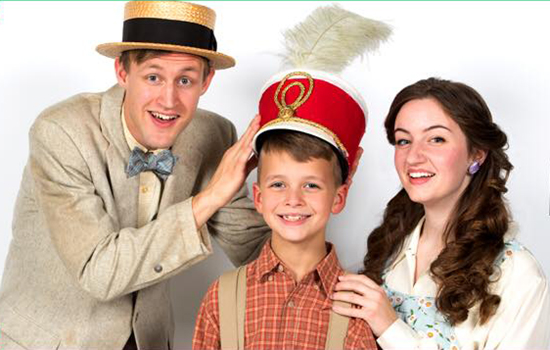 Thursday, January 26, 2017
Cedarville University Theatre will open its spring semester production slate with “The Music Man,” on Thursday, Feb. 2, in the DeVries Theatre. The musical will run through February 12. Tickets go on sale on January 17 and can be purchased at cedarville.edu/ticketinfo.

In “The Music Man,” Harold Hill, a slick traveling salesman, convinces a town to start a band by purchasing uniforms and instruments from him, intending to flee as soon as he receives the money. As Harold begins to develop feelings for Marian, the town’s librarian, he faces a difficult decision about skipping town.


"The most inspiring truth of 'The Music Man' is the hope we have in being able to change.”

“The most inspiring truth of “The Music Man” is the hope we have in being able to change,” said Rebecca Baker, director of the production and associate professor of theatre. “Harold, a man who cared mostly about himself, is jolted by the realization that truth and personal commitment matter more than collecting on his salesmanship skills. We see him transformed to a man who chooses to answer a child honestly, declare genuine love and accept handcuffs rather than running. This is different than a fairytale; it’s realizing that actions have consequences.”

“Rehearsals have been a blast so far, and the cast is a really great bunch of people,” said Robbie Lindmark, a freshman theatre major from Bath, New York, who plays the role of Harold Hill. “The songs and dances are all coming together very nicely.”

“Everyone in the cast is doing a fantastic job; it's a true joy to spend my time working on this show,” said Rachel Rowland, a senior intercultural studies major from Mahwah, New Jersey, who plays the role of Marian Paroo.

“The Music Man” opened on Broadway in 1957 and ran for 1,375 performances, winning five Tony Awards. It was adapted for film in 1962, and a television remake was done in 2003 starring Matthew Broderick and Kristen Chenoweth.

Cedarville University’s theatre program is known for its often sold-out, award-winning productions, and received 17 DayTony awards for productions in its 2013-2014 season.