A High-Five for Cedarville University! 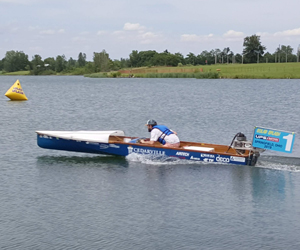 The most decorated solar splash team, Cedarville University, continued its dominance in the 2019 Collegiate World Championship of Solar Boating during competition held June 11-15 at the Clark County Fairgrounds in Springfield.

Cedarville claimed its fifth consecutive world solar splash championship, narrowly defeating the University of Puerto Rico at Mayaguez in the closest finish in recent history. The victory was also Cedarville's 12th championship in the 26 years of Collegiate World Championship of Solar Boating competition.

The victory was also Cedarville's 12th championship in the 26 years of Collegiate World Championship of Solar Boating competition.

"What separates the competitors are the little things," said Jeff Morehouse, head of the Solar Splash organization. "Inevitably, focusing on the technical report, workmanship, and visual presentation separates the top contenders for the overall prize."

From the beginning, it appeared the championship would come down to the two top teams--Cedarville and Puerto Rico. The Puerto Rico team won the qualifying and sprint on-water events, while Cedarville captured the solar slalom and endurance.