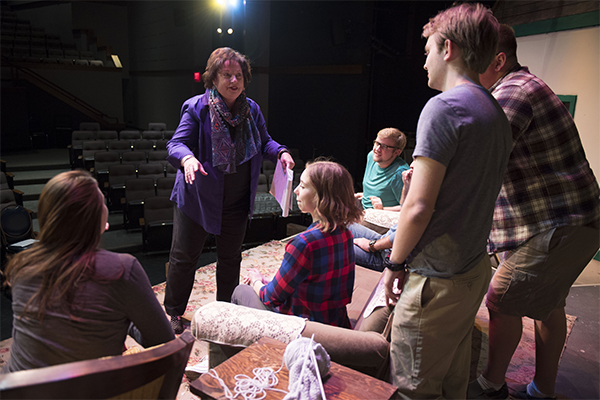 The Cedarville University theatre department will present “Appointment With Death,” an Agatha Christie murder mystery premiering Thursday, January 31, at 8 p.m. in the DeVries Theatre. Doors open at 7:30 p.m. for the two-hour show. The show will run until February 10.

“Appointment With Death” is set in 1940 in Petra, Jordan. A group of tourists settle into a luxurious hotel for a peaceful vacation as they recover from the impact of World War II. But, not long after their arrival, someone is murdered, and a detective has only 24 hours to find the culprit. Christie’s popular story is filled with intrigue, suspense and danger in an exotic and unfamiliar land.

“Getting to know new people in the cast who are immensely talented, and sharing M&M’s during breaks, is my favorite part of rehearsals,” said Abigail Krakora, junior theatre performance major from New Carlisle, Ohio, who plays Mrs. Boynton. “Acting necessarily intersects with my faith. When I play an evil character, like in this show, I'm reminded that our default setting as fallen people is to be evil and selfish.”

Krakora continued, “Without Christ, that's where we'd all be. Christ died for everyone while they were still evil and in sin, and I am reminded of that when I play characters still stuck there. It makes me appreciate Christ's gift even more.”

“My character is part of the Boynton family, and we’re building a very interesting family dynamic that I’m excited for audiences to see,” said Hunter Johnson, sophomore theatre performance major from Woodstock, Illinois, who plays Raymond Boynton. “Everything I do is filtered through a worldview of Christianity. Theatre and acting are things that I feel confident in and are worlds that I feel called to go into. My Christian beliefs inform the choices I make in theatre, and I feel the two actually meld easily.”

"Theatre is not only a way for an audience to be entertained but is a wonderful vehicle to visually present and share the Gospel."

The show features a diverse cast of actors from many academic years and majors. Evan Ellis, a freshman English major from Broomfield, Colorado, was introduced to the theatre department when he joined the props crew for the fall production of “Fools.” He is cast in Christie’s play as Lennox Boynton.

“Gaining skills here can help put me in positions where I can be a witness to secular actors one day. I want to shine the light of Christ in the world of theatre,” said Ellis.

This is the second production directed by Dr. Dawn Schluetz, assistant professor of theatre, who is in her second year at Cedarville University. “I absolutely love the process of directing,” said Schluetz. “I have a passion for character development, and it's been a pleasure watching these characters come alive. Christie had so much insight into people and their personalities, and that makes for such an interesting script.”

“I enjoy being able to share the passion for the stage with others, work hard with the director on portraying my character and getting a mandatory time to act and joke around with friends,” said Hope Arango, freshman theatre performance major from Buundo, Uganda, who plays Sarah King. “Participating in theatre as an actor has challenged me in my faith by helping me fully understand who I am in Christ, know what my personal boundaries are and, especially during rehearsals, rely on him as my core source of strength when my soul and body are weary. To me, theatre is not only a way for an audience to be entertained but is a wonderful vehicle to visually present and share the Gospel.”

Tickets for the show can be bought at the door or online at www.cedarville.edu/ticketinfo.