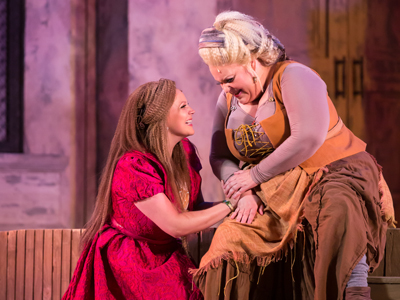 Show business is a tough industry to navigate, and landing a role on stage can be challenging. Cedarville University 2016 alumna Madison (Hart) Pettis has not only successfully navigated the industry, she’s already toured with multiple theatre companies across the West. With high hopes and early career success, Pettis is eastbound to launch her career in New York City.

“I'm getting to live my dream,” Pettis said. “We're fusing family and career in one of the greatest cities in the world, auditioning like crazy, and landing jobs that take us on amazing adventures all over the USA.”

After graduating from Cedarville, Pettis moved to Houston, Texas, earning a Master of Fine Arts in a two-year professional actor’s training program from the University of Houston.

“Not only can I serve him and his kingdom by the kinds of stories I choose to be a part of telling, but also how I live out his love offstage. It's more and more rare to be a Christian in this field.”

Since graduating, Pettis has performed on stages across the country. Her off-Broadway credits include Roxane in "Cyrano de Bergerac" with Titan Theatre Company in New York City. She has recently played Desdemona with Montana Shakespeare in the Parks, Juliet in “Romeo & Juliet” with the Colorado Shakespeare Festival, Maria in "Twelfth Night" and Margaret in "Richard III" with the Houston Shakespeare Festival.

During this time, she also met her husband, Jordan Pettis, who is also an actor.

Pettis grew up seeing Cedarville productions in the DeVries Theatre. “As far back as I can remember loving anything, I've loved theatre,” said Pettis. “The stories, the people, the presence of a shared journey. I think it inspires empathy, evokes questions and starts conversations that would've otherwise gone unexplored.”

When choosing a college, Pettis wanted to attend a school where her love for theatre as well as her love for Jesus could be nourished and deepened. She found that at Cedarville, along with a rigorous theatre program.

“My time at Cedarville prepared me with voice training, movement work and character exploration.” Pettis said. “I remember the Shakespeare course my junior year with Matt Moore proving especially constructive. I fell for Shakespeare that fall, and have been exercising those skills ever since.”

Pettis sees her career on stage as God’s calling through storytelling. “Not only can I serve him and his kingdom by the kinds of stories I choose to be a part of telling, but also how I live out his love offstage,” Pettis said. “It's more and more rare to be a Christian in this field.”

“We want to be a part of bringing the sweet aroma of Jesus into places often rank with cynicism and discouragement. We want to make fresh the treasures of love, purpose, and holiness,” Pettis said.

Located in southwest Ohio, Cedarville University is an accredited, Christ-centered, Baptist institution with an enrollment of 4,380 undergraduate, graduate and online students in more than 150 areas of study. Founded in 1887, Cedarville is recognized nationally for its authentic Christian community, rigorous academic programs, including its Bachelor of Arts in Theatre program, strong graduation and retention rates, accredited professional and health science offerings and high student engagement ranking. For more information about the University, visit www.cedarville.edu.