"Comedy of Errors" Has Homecoming Appeal 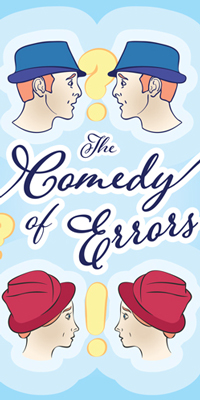 A Shakespeare comedy about a reunion of siblings seems like a perfect match for Homecoming and Parents Weekend at Cedarville University.

Egeon, his wife, the twin sons and twin servants were shipwrecked and separated, each "set" of people not knowing if the other survived. What comes next begins a comedic adventure of wrong identities, romantic failures, false accusations and plenty of confusion all around as the family tries to reunite.

Physical comedy is an important aspect of the show, so expect to see plenty of exaggerated movement.

“’The Comedy of Errors’ is a show about reconciliation and family.”

According to director Dr. Diane Merchant, professor of theatre, “The Comedy of Errors” represents one of 16 theatrical genres Cedarville students experience during their four years on campus.

“Students will be exposed to musical comedy; Shakespeare; the Broadway musical; a production where music is used in a contemporary way in a unique setting, like our black-box performance venue; a social issue play; among others,” Merchant said.

“’The Comedy of Errors’ is a show about reconciliation and family, so there’s a connection to homecoming,” she added. “With homecoming, we wanted a show that would be a good fit for people coming to campus, with a script accessible to different ages and that children could enjoy.”

One fun fact of the Cedarville show is that three cast members are actually twins themselves, something that did not come out until the first rehearsal.

Among the twins performing are Thomas Folkerts of Richmond Hill, Georgia, who plays Duke Solinus; Rachel Terrell from Xenia, Ohio, who portrays a ruffian and a jailer; and Teagen Bolin of Edmeston, New York, a lady of the court.

Playing Dromio of Ephesus is Abigail Shaffer of Bossier City, Louisiana, who happens to be a triplet in real life, with her two sisters currently attending Cedarville. Performing in the other lead roles: Joey Evans from Beavercreek, Ohio, as Antipholus of Ephesus; Hunter Johnson of Woodstock, Illinois, as Antipholus of Syracuse; and Beth Oldham, Kenton, Ohio, playing Dromio of Syracuse.

Blake Hansher from Grove City, Ohio, is the dramaturg for the show, which included preparing a background historical guide for “The Comedy of Errors.” “Educating the audience about the background beyond the plot is always one of our goals,” Merchant explained.

While the show’s original setting is ancient Greece, the Cedarville production will take place in America of the mid-1960s, which will be reflected in the performers’ bright and colorful costumes and the stage lighting.

“We wanted to make a connection between ancient Ephesus and give a nod to the British because of Shakespeare,” Merchant said. “That time in history saw the British invasion of music, which affected American culture, but it’s still in the time of healing after President Kennedy’s death but before the Vietnam war protests of the late 60s.”

Performances begin October 3 at 8 p.m. There will be 2 p.m. and 8 p.m. performances October 4-5 and October 11-12. There will be two special showings: Thursday, October 10, at 10 a.m. for elementary, middle school and high school students, but also open to the general public; and a 3 p.m. matinee on Sunday, October 13.

Prices are $12 for students of all ages, and $15 for adults. Special pricing available on the following showings: $10 for students on opening night, 12 for adults for the October 4 matinee, and $5 for the student matinee on Oct. 10.

To purchase tickets online, visit this site. Tickets also available in the Stevens Student Center at the campus activities board desk.