Discipleship on the Go

What do the roof of a house, the student union, an overcrowded bus, an atheist’s dorm room, a church member’s garage, and a basketball arena all have in common? For me, these are the settings in which my life was transformed through the investment of godly mentors.

When I was in college, I was privileged to be discipled by several godly men. When I started that process, I thought it would mean attending a Bible study and, perhaps, a weekly meeting. Next thing I knew, I was on a roof helping adjust a satellite dish. Another time, I found myself helping an elderly church couple clear their garage. Yet another, my mentor and I attended a basketball game on campus, cheering our team to victory and talking during timeouts.

Some of the most meaningful investment happened as my mentor and I were serving others. We visited students on the campus of my state university to share the Gospel. We squeezed into a bus far beyond capacity on a missions trip in east Africa as we traveled to teach the Scriptures to young believers. These became unforgettable shared moments of following Jesus where we built up one another, and I learned how to become a disciple-maker.

While I did not always realize it at the time, in all of these settings, God was working in my life through the faithfulness of others. In my experience, discipleship on the go bears the fruit of multiplication.

Discipleship does not start when the small group meeting starts, and it does not stop when the Bible study workbooks close. On the contrary, discipleship is happening on the go at Cedarville University just as all of life happens on the go. Programs will always have their place in organizing, motivating, and facilitating people in discipleship relationships. At the same time, programs are not the point; transformed lives and multiplying fruit to the glory of God is the point. 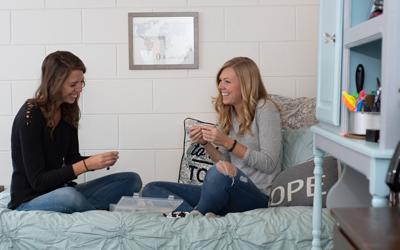 God’s design for discipleship is for truth to be transmitted through personal relationships. Jesus modeled life-on-life discipleship through the manner in which He called the disciples. For example, in Luke chapter five, Peter, James, and John are called out of the boat and Levi is called out of the tax booth to follow Jesus. This calling was one of being with Jesus. Through the personal investment of the God-Man in their lives, the disciples of Jesus grew.

Not only did they grow, they would become fishers of men. The calling to follow Jesus comes full circle as they received the commission to take the Gospel of Christ forward and make disciples of all nations. Jesus demonstrates the normal trajectory for a Christian: growing toward maturity and leading others to do the same. The process of discipleship is not complete until a follower of Jesus takes the Gospel forward and seeks to multiply followers of Jesus.

The Apostle Paul modeled life-on-life discipleship throughout his ministry and captured the essence of spiritual multiplication in 2 Timothy 2:1–2. Paul’s first exhortation is for followers of Jesus to be firmly rooted disciples, strong in the grace of Jesus Christ. Then, as an outgrowth of personal following, to lead others to do the same.

Paul’s instruction captures the essence of spiritual multiplication by pointing to four generations of believers, all facilitated by personal investment from Paul to Timothy to “faithful men” to “others.” From this brief snapshot of discipleship ministry in the life of Jesus and Paul, it is evident God’s design is that discipleship on the go bears the fruit of multiplication.

It takes an entire community to make a disciple, yet every semester I am amazed at the ways individual students embrace a personal vision for discipleship on the go. There’s nothing more encouraging than examples like the ones that follow of students leading the way in life-on-life discipleship.

Andrew arrived at Cedarville with a wonderful heritage of discipleship from his family. Through chapel, Bible classes, and a continued pursuit of the Lord, Andrew grew in maturity and Christlikeness. As an underclassman, Andrew served on chapel bands and through HeartSong Ministries. As the years passed, it became evident Andrew was prepared to lead.

The process of discipleship is not complete until a follower of Jesus takes the Gospel forward and seeks to multiply followers of Jesus.

IN THE RESIDENCE HALL

Kelsey sought to walk with the Lord and be an encouragement to everyone she met on campus. She possessed a godliness and a spirit that edified those around her. As she grew, she found her niche drawing together other ladies in the residence hall in friendship, which involved sharing the Word of God with one another. In due time, Kelsey’s discipleship influence on those around her found a home when she was hired as a Resident Assistant.

Kelsey had a great impact as she modeled a consistent example of Christlikeness and intentionally built up younger women through the Scriptures. One of those impacted was a student named Mandy who found in Kelsey a consistent model for the pursuit of Christ and a friend who was a few steps ahead of her in the journey. Of course, the next chapter of the story is that Mandy in turn sought to impact others in her residence hall. And down the line, Mandy became a Resident Assistant herself. Discipleship on the go bears the fruit of multiplication.

Joel grew through the influence of upperclassmen and Bible professors throughout his undergraduate degree. As a student chaplain, a leader in Discipleship Ministries, and a young man who quietly and consistently influenced others for Christ, Joel left an imprint on several lives by the time he graduated. Yet, the story did not end there. A year after graduating with his undergraduate degree, Joel returned to pursue his Master of Divinity degree. With ministry experience under his belt and a renewed pursuit of the Lord on campus, Joel eagerly embraced the opportunity to use his education and experience to continue making disciples.

Then along came Cameron, a young Christian who had much to learn about his new life in Christ. As Cameron sought a mentor, a mutual friend introduced him to Joel. Through consistent meetings studying the Bible and walking through life together, Cameron grew in the faithfulness Joel modeled. After a few years of growth, Cameron then embraced the role of disciple-maker as a small-group leader and an avid encourager to students receptive to the Word of God. Discipleship on the go bears the fruit of multiplication.

Abigail grew up in Spain and transferred to Cedarville as a sophomore. She was drawn to Sarah’s friendliness and welcoming spirit. Even though it was Sarah’s final year on campus and her friend group was established, it did not stop her from extending the effort to get to know Abigail. Her final semester before graduation, Sarah continued to invest deeply in Abigail through spiritual conversations, including bringing Abigail along in Sarah’s own journey of experiencing God’s faithfulness in the uncertainty of life.

Sarah’s influence still continues from India while Abigail finishes her education at Cedarville. Sarah’s discipleship efforts in turn provided Abigail a vision to prioritize others in her life and to love them through serving and making disciples, particularly among international and missionary students. Discipleship on the go bears the fruit of multiplication.

Each of the testimonies above are a portrait of the 1,000-day discipleship cycle we witness each year in the student body at Cedarville University. Freshmen enter the University and are challenged to become consistently growing disciples of Jesus. As they return for their sophomore year, the vision we cast is for them to deepen in maturity and serve others as established disciples.

Through continual investing, a student’s junior year is marked by becoming a disciple-maker, which means pursuing expanded personal growth and seeking to influence others. Ultimately, by a student’s senior year, they are often serving as disciple-multipliers in our community, as they continue to follow faithfully and equip other disciple-makers who have arisen through their previous faithfulness.

The discipleship cycle is aimed at launching students into the world with a commission to proclaim the Gospel and raise up disciples in their local churches. The God-designed horizon for discipleship is the multiplication of followers of Jesus for the glory of God in the local church. Our ambition is that learning discipleship on the go during 1,000 days on campus bears the fruit of multiplication for a lifetime.

Jon Wood is Vice President for Student Life and Christian Ministries and Assistant Professor of Theological Studies. He earned his Ph.D. in systematic theology from Southwestern Baptist Theological Seminary.