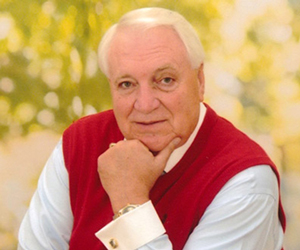 Dr. Jerry White, lead pastor at Casey Creek Church in Chesnee, South Carolina, will speak in chapel at Cedarville University on Thursday, Aug. 29. Chapel begins at 10 a.m. and is open to the public.

White preached his first sermon at Piedmont Baptist Church in South Carolina when he was 13 years old and began to consistently lead churches when he was 20. In 2013, White became the lead pastor at Casey Creek Church — the same church where his father preached in the 1970s.

White preached his first sermon at Piedmont Baptist Church in South Carolina when he was 13 years old and began to consistently lead churches when he was 20.

In 2015, White was honored for his 50 years of preaching by a lifelong friend who dedicated a church in Kenya, Africa, in his name.

White has served as a trustee at Anderson University in Anderson, Indiana, and president of the South Carolina Baptist Convention. He currently serves as a trustee at LifeWay Christian Resources.

He earned his Master of Education in Religion and his Doctor of Ministry from Luther Rice Seminary in Lithonia, Georgia.

White and his wife, Janet, have two sons, Thomas and Todd. His son, Dr. Thomas White, is the president of Cedarville University.

Located in southwest Ohio, Cedarville University is an accredited, Christ-centered, Baptist institution with an enrollment of 4,193 undergraduate, graduate and online students in more than 150 areas of study. Founded in 1887, Cedarville is recognized nationally for its authentic Christian community, rigorous academic programs, strong graduation and retention rates, accredited professional and health science offerings and high student engagement ranking. For more information about the University, visit www.cedarville.edu.