Dream of Adoption Coming Together During National Adoption Month 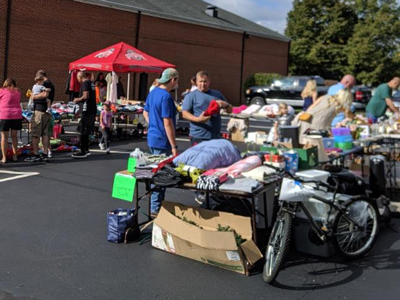 National Adoption Month is a time to celebrate families growing through adoption. For one Cedarville family, the dream of adoption is starting to come together, due in part to the amazing outpouring of support from the community, evidenced during a community-wide garage sale this fall.

John and Jennifer Davis are longtime members of the Cedarville community. Their family of six is very involved with Cedarville University and Grace Baptist Church in Cedarville.

Jennifer Davis has long had a dream of adopting. When she was a child, she imagined adopting a child from Africa. “After starting a family of my own, I quickly realized that I would be unable to fulfill the traveling commitments,” she said. “My passion then transitioned to domestic adoption.”

John Davis, associate vice president of human resources at Cedarville University, took a little longer to come to experience the same passion. He had the opportunity to go on a mission trip to Africa in 2017. Through seeing the lives of several children there, John Davis began to rethink what it would look like to bring another child into his home.

“People would buy something that was valued at $1 but gave $20.”

“God was changing my thinking about being done having children,” he said. “God moved my heart to align with where Jenn's heart has always been.”

John Davis eventually felt that God had called his family to adopt. “God has gifted my wife in an immense way to shepherd children so they thrive and feel loved,” said John Davis. “Adoption is an outflow of our desire to utilize our skills and abilities that God has given us to have kids and raise another child.”

In February 2018, the Davis family began the adoption process, choosing to adopt through the nonprofit Choosing Hope. Choosing Hope estimated the cost to adopt to be between $15,000 and $18,000. After approval in December 2018, the Davis family applied for a grant from Lifesong, an adoption partnering site, through Grace Baptist Church. After a long application process, they received a $4,000 matching grant.

“We had raised $1,000 through other fundraising efforts but wanted to do something bigger to make sure we could get the entire $4,000 matched,” said Jennifer Davis.

This sparked the idea to host a garage sale on Labor Day this year. Jennifer Davis reached out to friends through Facebook and by word of mouth to generate donations for the sale. “We received two garages full of items from family friends,” said Jennifer Davis. “This blew me away.”

On the morning of Labor Day, the family arrived at 6:30 a.m. to set up at Grace Baptist Church located on Main Street. The garage sale lasted the entire day. Many people stopped to purchase items and also donated to the adoption, Jennifer explained. “People would buy something that was valued at $1 but gave $20.”

“We had a bed that we were going to sell but there were two young married college students that had a need for it, so we chose to give it to them,” explained Jennifer Davis. “They not only came to our garage sale but gave us an extremely generous amount of money as well.”

This is just one example of the generosity the Davises experienced. The garage sale was a huge success and evidence of God’s generosity, explained John Davis. The Davis family received $3,000 during the one-day sale.

The Davis family have continued to raise funds, but they are greatly encouraged by the support of the Cedarville community in the adoption process.

“It’s 10,000 times harder to adopt than I had thought,” said Jennifer Davis. “It is a huge undertaking emotionally, financially and physically, but this does not change where our hearts are.”

In addition to friends and family support, Cedarville University supports full-time staff members that adopt children. After adopting a child, Cedarville employees can request $3,000 to be reimbursed for adoption expenses.

“The university community is very much a community that is welcoming to adoptive families,” noted John Davis. The Davis family is anticipating the arrival of a baby to adopt at any time. “The Lord has prepared our hearts from the outpouring of his generosity,” said Jennifer. “We are ready to love on another baby.”

If you are interested in supporting the Davis family above their matching grant, you can donate through Lifesong using their name, John and Jennifer Davis. You can also support adopting families through Choosing Hope.