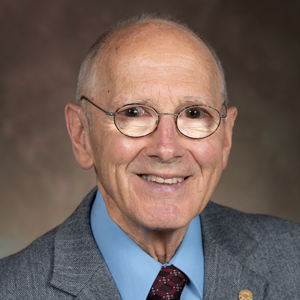 Wood served as vice president from 1987 to 2005, and then as executive director of program development from 2005 to 2010. He became a professor in Cedarville’s school of business administration in 2010 and continued serving as an adjunct up until his death. He was a beloved professor in Cedarville’s M.B.A. program and taught 26 students in two sections of Management-6710, Organizational Design and Behavior, even this fall semester.

“Duane Wood will be remembered for his faithfulness to Scripture, his passion for teaching and students, his boundless energy and optimism and the academic legacy he built at Cedarville,” said Thomas White, president. “He loved the Lord, served his church and family with excellence and finished his journey well. He will be missed by family and friends alike.”

“Duane Wood will be remembered for his faithfulness to Scripture, his passion for teaching and students, his boundless energy and optimism and the academic legacy he built at Cedarville."

"I wanted a Christian college that prized academic quality," Wood stated in 1987, shortly after his hiring. He noted then that Cedarville was a place where "as much learning takes place outside the classroom as inside the formal classroom setting."

Wood built on Cedarville’s quality, and as the chief academic officer, he helped position Cedarville as a leader in Christian higher education, with multiple world-class programs launched during his tenure. Most notably, Wood led the development of Cedarville’s school of engineering and computer science and paved the way for a school of pharmacy and the industrial and innovative design program in partnership with the International Center for Creativity in Columbus. He also oversaw Cedarville’s foray into graduate programs. For his service and impact on the university, Wood was recognized as Cedarville’s Honorary Alumnus of the Year in 2010.

“We are saddened at the loss of Dr. Wood, a man of God, a dedicated member of the Cedarville family and a visionary leader who raised the academic stature of Cedarville to new heights,” noted Dr. Paul Dixon, former president of Cedarville and current chancellor. “He leaves a legacy of excellence. We will miss this dear friend, but we also look forward to seeing him once again in Glory.”

In addition to his academic career, Wood conducted management training as a consultant to more than 25 business and nonprofit organizations, including Ford Motor Company, General Motors, Bath Iron Works, Dow Chemical, IBM, Dow Corning and the U.S. Armed Forces. He was also a trustee for the New England Baptist Bible College, Jerusalem University College and the Kettering College of Medical Arts. He wrote more than 60 articles and papers published or presented in professional management and higher education conferences.

Dr. Wood is survived by his devoted wife of 53 years, Sharon (Sherrie), who served as an administrative assistant at Cedarville from 1988 to 2011; sons, Curt D. Wood of Columbus, Ohio, Casey H. ’93 and Michelle Wood ’92, associate professor of English, of Cedarville, Ohio, and Evan D. ’97 and Lisa Wood ’98 of Ft. Wayne, Indiana; and grandchildren, Adam, Claire, Callan, Emi, Kyler and Cami.