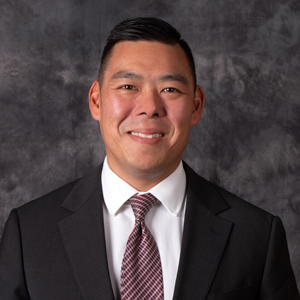 From assistant Franklin County prosecutor to the U.S. Department of Justice to a Florida circuit court judgeship, one thing has stayed the same for Vincent Chiu — people have inherent value, no matter who they are or what they’ve done.

Chiu, a 2001 political science graduate of Cedarville University, was recently appointed to a seat on the Ninth Judicial Circuit Court in Florida. Chiu began his new role on October 28.

Chiu, who lives in Orlando, Florida, has served as a federal prosecutor for the Middle District of Florida for the last 11 years, handling cases initially that involved violent crime, drugs and gangs. For the past seven years he’s focused on national security, terrorism, cybercrime and white-collar crime.

"No matter what they’ve done, even though there are consequences when people break the law, that doesn’t affect their value as a person in the spiritual sense."

Chiu credits his time at Cedarville for helping him shape a balanced perspective that accounts for both justice and grace.

“A biblical worldview does inform your decision-making because it gives us an understanding of the human condition,” Chiu said. “That means the person in front of me has inherent value. And no matter what they’ve done, even though there are consequences when people break the law, that doesn’t affect their value as a person in the spiritual sense.”

Chiu’s first assignment in his new role will be domestic relations cases, which include divorces, dissolutions, child custody and adoptions. “It will be a very different experience, working with people trying to salvage a marriage or remove themselves from a marriage, trying to figure out the right thing to do with children,” he said.

Later in his term, he will judge criminal felony cases and civil filings where damages of at least $30,000 are sought. His current term will go until 2022, and then he will run for election to the court. If elected in 2022, he will serve a six-year term.

For Chiu, engaging the dilemmas of human life has been in his life plan for a long time. However, instead of a court of law, he could just as well have been serving on the mission field.

“I was on a mission trip with Cedarville to South Africa the summer after I graduated,” he explained. “I was considering being on the mission field in South Africa. Usually when you get to the point of thinking, ‘God wants me to be a missionary,’ you figure God is going to say ‘yes’ to that. But literally the next day, I got an email from The Ohio State University Moritz School of Law telling me someone had donated $30 million to the law school, and they were offering me a full ride plus a stipend.”

Chiu credits Cedarville with helping him develop values that members of the Florida bar, regardless of their role in the legal system, found desirable in a judge.

Located in southwest Ohio, Cedarville University is an accredited, Christ-centered, Baptist institution with an enrollment of 4,380 undergraduate, graduate and online students in more than 150 areas of study. Founded in 1887, Cedarville is recognized nationally for its authentic Christian community, rigorous academic programs, including our Bachelor of Arts in Political Science program, strong graduation and retention rates, accredited professional and health science offerings and high student engagement ranking. For more information about the University, visit www.cedarville.edu.