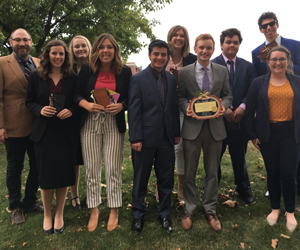 Cedarville placed behind Bradley University (1), Northwest Missouri State University (2) and Eastern Michigan University (3) and ahead of Ohio University, University of Illinois at Chicago and Hillsdale College. The result was the second consecutive strong outing for Cedarville as it placed third out of eight schools at Muskingum University three weeks earlier.

“Cedarville’s forensics team demonstrates that Cedarville is serious about academic achievement and high-quality competition,” said Eric Mishne, assistant professor of communication and speech team coach. “The team has achieved competitive success against some very well-respected schools in the speech community.”

In 2020, the speech team will compete in tournaments at Butler University, Ohio University, Heidelberg University and the national championship at Grove City College in Grove City, Pennsylvania, in March.

“Representing Cedarville University at regional and national speech competitions has expanded my ability to engage the culture, increased my ability to think quickly and clearly and refined my communication skills,” said Pierce.

Located in southwest Ohio, Cedarville University is an accredited, Christ-centered, Baptist institution with an enrollment of 4,380 undergraduate, graduate and online students in more than 150 areas of study. Founded in 1887, Cedarville is recognized nationally for its authentic Christian community, rigorous academic programs, including a Bachelor of Arts in Communication, strong graduation and retention rates, accredited professional and health science offerings and high student engagement ranking. For more information about the University, visit www.cedarville.edu.