From Atheist to Servant Leader to Graduation 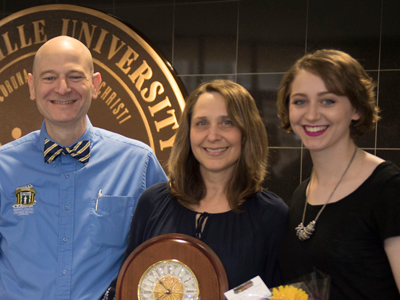 Kimberlyn Wideman, senior social work major from Huber Heights, Ohio, has a reputation as a leader and servant at Cedarville University, so much so you would never guess she was a committed atheist less than five years ago. Her growth and development is a testimony to God’s transforming power in the life of anyone who genuinely seeks him.

Wideman was raised in a Christian home; baptized; participated in vacation Bible school, camp, youth group; and went to a private Christian school, yet something was missing. She prayed a salvation prayer in Sunday school, but there was no faith behind it. As she grew older, she was exposed to different viewpoints and friends who didn’t follow Christ.

"I realized that even though I didn’t understand it, if I turned and repented, God would call me his own.”

After her sophomore year of high school, she lay in bed one night praying and realized that she didn’t feel like she was talking to anybody other than herself. She decided she was tired of going through the motions and accepted atheism.

During her senior year of high school, Wideman started to realize there would be enormous consequences if she was wrong about God. She began to listen more in Bible class and chapel at school and finally, on March 19, during a worship chapel at her high school, she gave her life to Jesus.

“Between the songs, there was a teacher who was talking about the life of Peter,” Wideman recalled. “He spoke about how Peter continually put his foot in his mouth, did everything wrong and even denied Jesus, yet Jesus forgave him, loved him, called him his friend and still used him in amazing ways. I realized that even though I didn’t understand it, if I turned and repented, God would call me his own.”

Before accepting Christ, Wideman had applied and been accepted to Cedarville University. Now as a Christian, Wideman knew that Cedarville would be the perfect place to grow her newfound faith.

“Over the years, I have seen Kimberlyn mold to the image of Christ,” said Melissa Brown, assistant professor of social work. “She has continued to demonstrate a teachable spirit and consistent growth in the knowledge, values and skills of the profession. She is gifted with leadership capabilities and is an excellent communicator. I am excited to see how the Lord uses her in the profession of social work.”

Wideman was a STING leader, welcoming freshmen to campus, and a community life coordinator in Printy Hall. She has also been involved in theatre productions as an actress and on crew, danced with Cedarville’s AYO dance organization, served in STARS, an after-school mentoring program for sixth grade girls, and led a discipleship group.

Wideman also serves as the president of the Phi Alpha Honor Society, the senior social work honors organization. After graduation, she hopes to pursue a master’s degree in social work from Ohio State University.

Her parents, Kearsen, assistant manager of custodial services, and Barry Wideman, adjunct professor of social work, have seen a noticeable change in their daughter. “Seeing Kimberlyn seek out and serve as a discipleship group leader was remarkable,” said Barry Wideman. “She is active in her own church and, this summer, she found a body of believers to meet with while she was doing an internship in Tennessee, and she worked to expand their ministry while she served there.”

Kearsen Wideman continued, “Kimberlyn has grown greatly as a social work professional. She has grown as a thespian as well. As parents, we are very proud and confident that God has more great things in store for her.”

“I have a lot to work on, but I see how different I am from freshman year,” said Wideman. “I have learned that God’s plans are so much better than anything I could come up with. No matter where God leads me, it’s going to be good, not because he’s going to give me a husband or children or a job, but because I’m going to be in a relationship with him.”