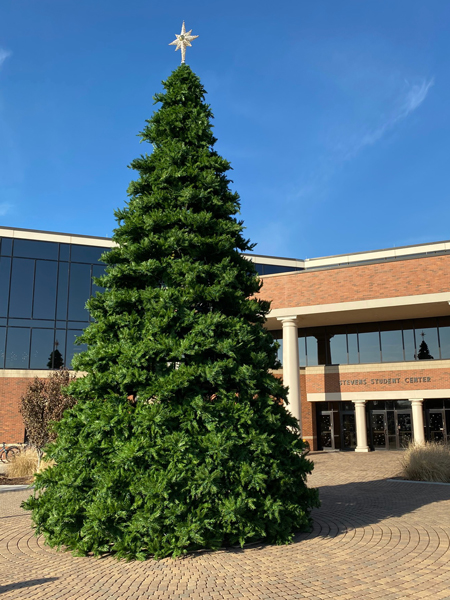 Cedarville University will host its first-ever Christmas Tree Lighting ceremony on Tuesday, Dec. 3, at 7 p.m. on the patio outside the lower level of the Stevens Student Center (SSC) in honor of #GivingTuesday, the international day of charitable giving at the beginning of the Christmas and holiday season.

The 32-foot “Giving Tree” will feature ornaments with the names of Cedarville friends and family who made a gift toward the university as part of #Giving Tuesday.

“Christmas has always been something special at Cedarville,” said Rah Jacob, assistant director of student philanthropy and young alumni, the organizer of the event. “We want #GivingTuesday to be something special for the people who contributed to the campaign, as well as for our students. It will be a new tradition at Cedarville.”

Jacob, along with Kaileigh McCann, coordinator for communication and regional programming, spearheaded preparations for the event. The “Giving Tree” will have more than 1,000 ornaments, weigh more than 3,000 pounds, and display 15,120 lights. The tree will be located over the clock tower and will cover it completely.

“We want #GivingTuesday to be something special for the people who contributed to the campaign, as well as for our students. It will be a new tradition at Cedarville.”

The ceremony will feature musical selections by the Inversions, a student coed a cappella choir; the Christmas story read by Sarah Shaw, student government association president, and Jim Cato, associate vice president of Christian ministries; and a report of funds raised on #GivingTuesday by Dr. Rick Melson, vice president for advancement. Cookies and hot chocolate will be served.

The ceremony will be live streamed on Dec. 3 starting at 6:30 p.m. The livestream will be hosted by Kim Ahlgrim, director of The Cove, Cedarville’s academic enrichment center, and Jonathan Lyons, advancement’s campaign manager.

“I think pairing this event with #GivingTuesday offers a fresh reminder of what Christmas is all about,” said Jacob. “Christ coming to earth was the best gift we could have ever been received, and is the ultimate example of the generosity we celebrate with this tree on #GivingTuesday.”