Keith and Kristyn Getty in Concert on October 28 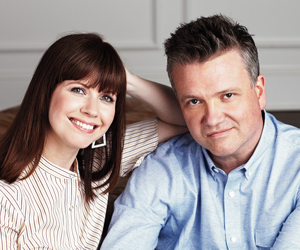 Cedarville University will host the regional SING! Ohio conference on Monday, October 28, featuring Keith and Kristyn Getty. It will be held in the Dixon Ministry Center from 12-9 p.m., and the public is invited to attend.

The Gettys are musicians from Northern Ireland who now reside in suburban Nashville. Their most well-known song is “In Christ Alone,” which Keith wrote with Stuart Townend; it has been the top church worship service song in the United Kingdom for the past nine years.

In 2017, the Gettys created the national SING! Conference and tour. The Getty Music Worship Conference, which quickly became the largest worship conference in the country, is expected to draw more than 13,000 people this year as it is expanding its program to regional venues, including Cedarville University in Ohio.

“Keith’s passion is to get the congregation involved, having singable songs with universally true lyrics. He wants people to sing to the Lord,” explained Dr. Roger O’Neel, assistant chair of worship and associate professor of worship.

“Keith’s passion is to get the congregation involved, having singable songs with universally true lyrics. He wants people to sing to the Lord."

At SING! Ohio, there will be a free leadership summit from 12-2 p.m. in the Dixon Ministry Center Recital Hall where Keith Getty will discuss topics including “A Vision for a Singing Church” and “Singing into Mission.” Attendance is limited to 180 people. Register at cedarville.edu/singohio.

That evening at 7 p.m. in the Jeremiah Chapel, the Gettys will perform a concert, their lone concert in Ohio this year. Along with the Gettys and their Irish and Bluegrass musicians will be a 250-member choir featuring Cedarville University students and individuals from church choirs throughout the Miami Valley. Tickets for the concert are available here and range from $12-30.