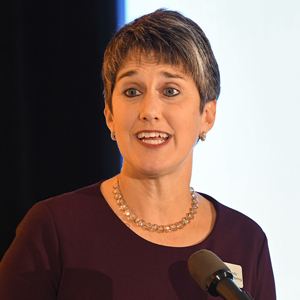 Cindy Hasselbring, a 1995 alumna of Cedarville University, started as a math teacher in rural Michigan, but now serves as one of the most influential individuals in the United States over science, technology, engineering and mathematics (STEM) education.

Hasselbring never thought when she graduated from Cedarville with a Bachelor of Arts in mathematics and an emphasis in secondary education that she would end up working for the federal government.

After graduating from Cedarville, she became a high school math teacher at Milan High School in Milan, Michigan, for 16 years before transitioning to several different roles involving state and federal policy.

She is now the senior policy adviser and assistant director of STEM education in the White House Office of Science and Technology Policy. Hasselbring was first introduced to government policy when she applied for the Albert Einstein Distinguished Educator Fellowship (AEDEF) and was accepted into the program in 2011. AEDEF is a program for math and science teachers around the country to learn more about policy within the federal government.

“STEM education isn’t just helpful for STEM careers, it is also helpful for being successful in life.”

In 2013, she transitioned to work for the Maryland State Department of Education and led STEM initiatives on behalf of the state superintendent, completely leaving the education field. After three and a half years there, she was chosen to lead a brand-new high school aviation initiative for Aircraft Owners and Pilots Association (AOPA), a nationwide nonprofit organization committed to advocating for general aviation accessibility and educating pilots. This was her dream job.

“I wasn’t planning to leave or looking for a job, but God has a way of changing that,” she said. “Being open to his will is sometimes hard, especially if what you’re doing is comfortable,” she said.

While working at AOPA, she learned about the role that she serves in today. She began her new position in August of this year.

“The senior policy adviser part of my job is reviewing any legislation that Congress sends over for review,” Hasselbring said. “The assistant director side is coordinating with the federal agencies on the strategic plan that came out in December of 2018, so I’m working on the implementation side of that.”

As a part of her role, she also looks at the investment side of STEM education. The federal government has earmarked billions of dollars for STEM education in its current budget.

Hasselbring is tasked with making sure those funds are well spent because of the growing demand for well-trained workers in the STEM professions. “We need students to go into jobs in the STEM field, not just in the workforce but in the federal government. This includes protecting our country, being innovative and developing new research,” she said. “STEM education isn’t just helpful for STEM careers, it is also helpful for being successful in life.”

Working in the federal government has been a transition from being a teacher, but she looks back fondly on how Cedarville prepared her to succeed.

“One thing I think about all the time is ‘for the Word of God and the Testimony of Jesus Christ,” Hasselberg said. “I think about that all the time because my number one priority here is to honor and glorify the Lord; that’s my mission.”

Located in southwest Ohio, Cedarville University is an accredited, Christ-centered, Baptist institution with an enrollment of 4,380 undergraduate, graduate and online students in more than 150 areas of study. Founded in 1887, Cedarville is recognized nationally for its authentic Christian community, rigorous academic programs, including the Bachelor of Arts in Mathematics Education, strong graduation and retention rates, accredited professional and health science offerings and high student engagement ranking. For more information about the University, visit www.cedarville.edu.