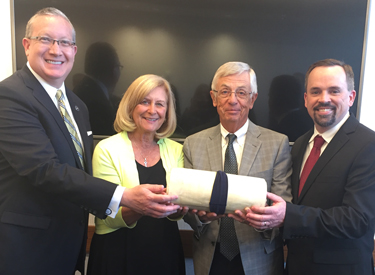 For a school whose mission statement starts with “For the Word of God,” there couldn’t be a much more appropriate gift.

The gift was presented to Dr. Jason Lee, dean of the school of biblical and theological studies, and to Dr. Rick Melson, vice president for advancement, during a ceremony in Minneapolis, Minnesota, last spring.

“When they’re looking at an English translation in a bound book or a digital translation, that’s quite a bit removed from being able to handle a scroll."

The gift was officially recognized and celebrated at Cedarville during its daily chapel service of the new academic year on August 19.

The Larsons have presented 52 Torahs to universities, seminaries, museums and other organizations for teaching, research and public viewing since 2013.

According to Lee, the Torah scroll presented to Cedarville likely dates from the late 17th century to early 18th century, during the era of the founding of the United States. The scroll comes from Eastern Europe.

“It was in public use in a synagogue at one point,” noted Lee. “Scrolls like this one were then decommissioned from that sort of use, and then moved into private hands. The reason for decommissioning is typically because of the fading of ink in certain areas.”

According to Dr. Michael Shepherd, associate professor of biblical studies at Cedarville, the Torah scroll presented to Cedarville contains biblical text only. There are no marginal notes or commentary on the text, and there are no vowels, punctuation marks, chapters or verses.

Shepherd is also confident of the time period in which the scroll was copied. “A lot of the letters have little crowns on the top,” Shepherd said. “That’s not something you would ever see in an ancient scroll like the Dead Sea Scrolls or a traditional Hebrew text from the medieval period, but that’s something that comes from this particular time that Dr. Lee referenced.”

For a generation of students used to accessing the Bible from apps on their smartphones, this scroll takes them back to the origins of scriptural preservation and continuity – scribes carefully, meticulously drawing each Hebrew letter, right to left, without one touching another, on kosher animal skin using ink from tar, oil, honey or some other organic material. It typically takes a year of diligent copying to produce a Torah scroll.

“When they’re looking at an English translation in a bound book or a digital translation, that’s quite a bit removed from being able to handle a scroll,” Shepherd said. “The scroll is something written on hide, something written by a scribe with particular techniques. That brings them closer to what the bookmaking process is actually like.”

According to Lee, the scroll will be housed in the Center for Biblical and Theological Studies (BTS), somewhere near the yet-to-be-completed Warren and Betty Wiersbe Library and Reading Room. But its primary function is not as a museum piece.

“I’d love for students to have multiple opportunities to see it,” noted Lee. “I’d love for many of our professors, including outside the BTS, to use it in their classes. Like a world history class for example. Chris Miller (senior professor of biblical studies) has talked about showing it in his Old Testament literature class. I took it into my historical theology class in the spring. Mike is thinking about using it in his spring semester Hebrew class, and Randy McKinion (associate professor of Old Testament) in his class on the Pentateuch.

“The Larsons weren’t interested in the Torah scroll being behind a case, but something people would use. And that’s what we want to do.”

Beyond the educational goals connected with the Torah scroll, McKinion expressed a larger hope for Cedarville students. “Having the Torah scroll creates an appreciation for the laborious task involved,” he said. “And this work was done to make the Word of God accessible.”

Located in southwest Ohio, Cedarville University is an accredited, Christ-centered, Baptist institution with an enrollment of 4,193 undergraduate, graduate and online students in more than 150 areas of study. Founded in 1887, Cedarville is recognized nationally for its authentic Christian community, rigorous academic programs, including its Master of Divinity program, strong graduation and retention rates, accredited professional and health science offerings and high student engagement ranking. For more information about the University, visit cedarville.edu.