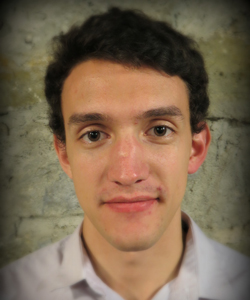 Cedarville University 2017 alumnus David Grandouiller has been named the Ohioana Walter Rumsey Marvin Grant winner for 2019. The $1,000 grant is awarded by the Ohioana Library Association every year to an Ohio prose writer under the age of 30 who has not published a book.

Grandouiller graduated from Cedarville with an English degree and is now working toward a Master of Fine Arts degree in creative writing at Ohio State University.

“Winning the grant was an encouraging acknowledgment that the work I'm doing is worthwhile,” explained Grandouiller. “Being in a writing program feels like an incubation period. It can feel very separate from the world, which sometimes makes me question whether anyone will even want to read what I'm writing. So it's helpful to have that affirmation.”

“Winning the grant was an encouraging acknowledgment that the work I'm doing is worthwhile."

To apply for the grant, Gradouiller entered four personal essays for review by a panel of three judges. His first essay, "Were You There," was about Grandouiller’s involvement with a church plant in Dayton and homelessness in Dayton. "In the Beginning, Bada Bing" was about a pizzeria in Springfield that recently shut down. "Antimanifesto" was a lyrical reflection on communion and uncertainty. His last essay, "Rehearsing Loss," was about being a spectator to grief and explores the question of who grief belongs to.

“I've been holding back from publishing anything for the last couple of years because I'm growing and changing a lot as a writer, and because most of what I'm working on is fairly intimate — I don't want to regret putting it out there,” said Gradouiller. “Applying to the grant was a simple way for me to solicit an impersonal reaction to my work without having to risk much exposure before I'm ready.”

Located in southwest Ohio, Cedarville University is an accredited, Christ-centered, Baptist institution with an enrollment of 4,380 undergraduate, graduate and online students in more than 150 areas of study. Founded in 1887, Cedarville is recognized nationally for its authentic Christian community, rigorous academic programs, including its Bachelor of Arts in English program, strong graduation and retention rates, accredited professional and health science offerings and high student engagement ranking. For more information about the University, visit www.cedarville.edu.