Professor's Non-Profit Honored at the Statehouse 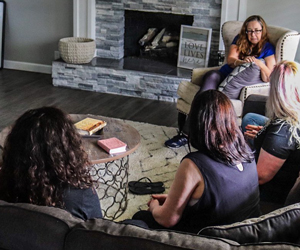 For Sandi Wagner, the social work lessons she teaches at Cedarville University have a real-life, real-time expression in her efforts on behalf of homeless and addicted women in Xenia, Ohio. And now she’s being honored for it.

Wagner, instructor of social work at Cedarville, is the co-founder of a nonprofit, Her Story. Her Story will be awarded the Addiction Policy Forum’s Innovation Now Award by the state of Ohio for its work as a temporary housing facility for women struggling with drug and alcohol abuse and contemplating change. The ceremony will be held Oct. 30 from 12-3 p.m. at The Ohio Statehouse.

In 2016, Wagner was approached by Whitney Caudill, president and co-founder of Her Story, to develop a nonprofit for bridging the gap between when a homeless woman seeks help with drug and alcohol abuse, and when she is able to get into a long-term inpatient substance use treatment center. Her Story was developed from the story of a mom that Caudill had been working with who wanted to recover but a lack of resources prevented her from entering inpatient treatment.

We want them to know that they are not on their own and that we fully support them, even after they leave.”

From this, Her Story was developed. Wagner and Caudill worked from 2016 to 2018 to raise funds and walk through policies to develop their nonprofit. Her Story does not receive federal or state grants, which allows them to tailor care to the specific needs of their clients.

Her Story’s private facility was formerly a foreclosed house that was purchased by a donor and renovated through funds raised from the community. This allows clients to be removed from the toxic environment that has supported their poor decision making. Her Story is fully supported by the community that surrounds the facility.

Wagner explained that women in need of inpatient substance abuse treatment often have long wait times that prevent them from getting help at the point they are contemplating change. This is a critical time for women who need to be removed from their toxic environment. Her Story provides a facility that allows women to be fully supported in that waiting time.

“We wanted it to be a space where a woman could detox and that felt very peaceful,” Wagner noted. “We didn’t focus solely on her as a person but also about the environment, we wanted the woman to feel valued.”

Since the doors have opened, Her Story has housed 31 women. From those women, 26 residents have graduated from the program and entered an inpatient treatment facility, like Safe Harbor House in Springfield.

“It’s very unique,” noted Wagner. “Other than a hospital setting, we are one of the only agencies that provide in-between care in Ohio.”

Her Story has just begun but wants to grow with time. The facility can currently house four residents because of zoning regulations.

“We are praying and dreaming to see ways that Her Story can grow,” said Wagner. Right now most women hear about Her Story through referrals from local jails, police officers and family.

As a faith-based organization, Her Story believes that faith in God is a crucial component in recovering from alcohol and drug abuse. Every morning starts with devotions, and clients are required to attend an AA meeting 5-6 times a week, including faith-based meetings, like Celebrate Recovery. Although it is not a requirement to be a Christian, all women entering the program are aware of the faith-based aspect of the program.

Many residents make faith decisions through the work of Her Story. Wagner explained that Her Story follows up to see if patients are still in sobriety after leaving. “We want them to know that they are not on their own and that we fully support them, even after they leave,” said Wagner.

“I am able to provide practical examples of what I am doing to my students,'' said Wagner. “Incorporating your faith in social work is huge.”

“Eventually it would be neat to use Her Story for the classroom,” she added. “I can see not only getting social work students involved but also nursing and pharmacy students.”

For more information about Her Story, visit https://www.herstoryhouse.com/.

Located in southwest Ohio, Cedarville University is an accredited, Christ-centered, Baptist institution with an enrollment of 4,380 undergraduate, graduate and online students in more than 150 areas of study. Founded in 1887, Cedarville is recognized nationally for its authentic Christian community, rigorous academic programs, including the Bachelor of Science in Social Work, strong graduation and retention rates, accredited professional and health science offerings and high student engagement ranking. For more information about the University, visit www.cedarville.edu.