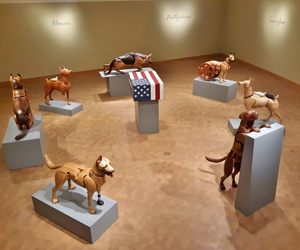 Retired Cedarville University professor of studio art James Mellick is bringing attention and honor to “Canine Warriors” through his wooden dog sculptures on display now through January 31, 2020, at the National Museum of the United States Air Force in Dayton, Ohio.

The exhibit, “Canine Warriors – Courage and Sacrifice, Always Beside You,” showcases eight wounded warrior dogs and four canine war dogs that each took Mellick around 160 hours to create. The sculptures will be on display during normal museum hours.

“The Air Force museum understands the important place and love that dogs hold in our culture, especially the military working dogs and the police dogs,” explained Mellick. “It is our wish that these dogs will raise awareness of the needs of wounded veterans who have made mental and physical sacrifices on our behalf, and be a catharsis of healing and relief of buried emotions and depression.”

“It is our wish that these dogs will raise awareness of the needs of wounded veterans who have made mental and physical sacrifices on our behalf."

Mellick has made wood carvings since 1976. In 1985 he began to tell stories specifically through dog sculptures, after first carving dogs to act as “scare-deers” to keep deer from coming into his garden.

Mellick continued to carve dog sculptures during his time at Cedarville while also teaching drawing, 3D design, sculpture and printmaking. He was awarded the 2012-2013 Faculty Scholar Award and helped plan and develop the current 3D and printmaking studios in the Alford Annex.

Once he retired from Cedarville in 2014, Mellick was inspired from news stories of veterans returning to the states with injuries. He decided to start a project that would portray the wounds and needs of our veterans and found that telling their story through dogs would work best since he had experience sculpting dogs. These dogs became the Wounded Warrior Dogs Project and have been touring across America since 2015.

The sculptures will be showcased around the country in 2020, including at the Gerald R. Ford Presidential Museum in Grand Rapids, Michigan; the National Infantry Museum in Columbus, Georgia; and Upcountry History Museum in Greenville, South Carolina.

Located in southwest Ohio, Cedarville University is an accredited, Christ-centered, Baptist institution with an enrollment of 4,380 undergraduate, graduate and online students in more than 150 areas of study. Founded in 1887, Cedarville is recognized nationally for its authentic Christian community, rigorous academic programs, including its Bachelor of Arts in Studio Art program, strong graduation and retention rates, accredited professional and health science offerings and high student engagement ranking. For more information about the University, visit www.cedarville.edu.