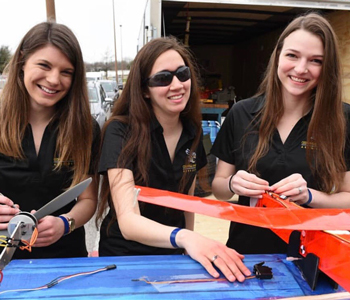 The Cedarville University Aero Design team took to the skies in Fort Worth, Texas, and placed third in the nation and seventh internationally in the 2019 Society of Automotive Engineers (SAE) Aero Design East competition. The event was held March 8-10, 2019.

According to the team’s captain, Victoria Holmes, the team experienced success on many levels. "The design process and development of our aircraft gave our team a real-life scenario in which we faced challenges that prepared us for the engineering workforce we will all soon be entering,” said Holmes, of Coal Grove, Ohio. “Overall, the strength of our team came from each individual’s God-given gifts and talents being utilized. I am so proud of my teammates for their dedication and tireless hours they put in to making our competition project a success!"

“I was extremely happy with the way the Cedarville team worked together to solve technically challenging problems to compete in an extraordinarily tough competition."

The multidisciplinary team consisted of students from mechanical, electrical and computer engineering under the advisement of Cedarville professors Dr. Tim Norman and Dr. Clint Kohl and Dr. Keith Numbers, from Wright Patterson Air Force Base (WPAFB).

Last year Cedarville finished fourth overall and was the third U.S. team behind Georgia Tech and University of Cincinnati.

This year, the competition had a new set of rules, the first year of a three-year battle to overcome the obstacles put before them by the SAE competition organizers.

There were 21 competitors in the advanced class, including some of the best U.S. schools in aeronautical engineering, including Georgia Tech and “all-star” teams from countries like Brazil, Canada, Poland and India.

Scoring for the competition consisted of three parts: a report submitted in February, a presentation the day before flying competition and a performance score from flying.

“I was extremely happy with the way the Cedarville team worked together to solve technically challenging problems to compete in an extraordinarily tough competition,” said Norman. “Their success builds on the reputation of our program and puts us in a good position for competition next year.”