"Socrates in the Cornfields" Seeks Kernels of Wisdom 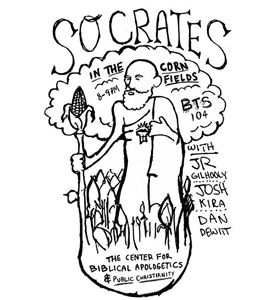 Cedarville University’s Center for Apologetics and Public Christianity will present its first seminar of the year, “Socrates in the Cornfields,” on September 26 at 8-9 p.m. in the Center for Biblical and Theological Studies, Room 104. This event is open to the public.

“‘Socrates in the Cornfields’ is a fun kickoff event for the center every year,” explained Dr. J. R. Gilhooly, director of the honors program and assistant professor of philosophy and theology. “I like participating because we have an open question and answer time for students to get feedback on issues that they have been wrestling with intellectually that pertain to Christian life and belief.”

At “Socrates in the Cornfields,” Dr. Dan DeWitt, director of the Center for Biblical Apologetics and Public Christianity and associate professor of applied theology and apologetics, will mediate the discussion between Gilhooly and Dr. Joshua Kira, assistant professor of philosophy and theology.

“The medieval university believed that ‘theology is the queen of the sciences and philosophy is her handmaiden,’” described DeWitt. “Because Christians are called to renew our minds in Romans 12:1-2, we should consider ways that our thought patterns are being conformed to the world. Thinking critically about our philosophical commitments is an important endeavor for any person wanting to be more intentional about how they understand the world around them.”

During the first half-hour of the seminar, DeWitt will present Gilhooly and Kira with undisclosed questions about philosophy. The following half-hour will be opened for audience questions.

“‘Socrates in the Cornfields’ allows students to address concerns that are close to their hearts,” explained Kira. “Frequently we are limited, due to time, from speaking to some theological and philosophical topics in class. ‘Socrates in the Cornfields’ gives us the opportunity to hear some of those questions and provide some scriptural direction.

“Students should consider coming not only to have their questions discussed but also to observe how Christian philosophers and theologians think in a manner that attempts to ‘take every thought captive to obey Christ’ as stated in 2 Corinthians 10:5.”

Located in southwest Ohio, Cedarville University is an accredited, Christ-centered, Baptist institution with an enrollment of 4,380 undergraduate, graduate and online students in more than 150 areas of study. Founded in 1887, Cedarville is recognized nationally for its authentic Christian community, rigorous academic programs, including its Master of Divinity program, strong graduation and retention rates, accredited professional and health science offerings and high student engagement ranking. For more information about the University, visit www.cedarville.edu.