From building into each other in discipleship groups, to inspiring classmates through HeartSong or chapel bands, to coaching and mentoring by Resident Assistants and Community Life Coordinators, Cedarville students learn early on that their 1,000 days will be exponentially better as they learn both to receive and then pour into others.

But few roles offer as much potential for touching the entire student body as class chaplains and the Student Government Association (SGA) Chaplain. Class chaplains speak to their peers twice a year, except for the freshman chaplain who’s elected fall semester and speaks in the spring. The SGA chaplain has 14 opportunities to bring God’s Word to undergrads, grad students, faculty, and staff throughout the school year.

With that level of influence comes a heightened sense of need for the student-speaker to be not just a skilled communicator, but also a person whose walk with Christ is maturing.

Cedarville has a long history of student-chaplains, beginning in 1954. When Harold Green, the University’s first campus pastor, joined the staff in 1970, he formed the Advisory 12 team, which then became Advisory Seven (Ad7). Under Green’s supervision, Ad7 planned and organized services for what was equivalent to a student-led church. Meeting in chapel, then located in what is now the Apple Technology Resource Center, the Ad7 team preached from the Scriptures, led worship, updated students on ministry opportunities, and solicited prayer requests and lifted those up for a student “congregation” of 400–700 on Wednesday nights, Sunday mornings, and Sunday evenings. “It gave students like me a chance to cut my teeth on spiritual leadership, to be part of a team running a church service,” offered Scott Kennedy ’97, who currently serves as Lead Pastor for Parkside Church – Lake County, in Mentor, Ohio.

“It wasn’t about my abilities, or what I could or couldn’t do. God had called me, and He was going to work through me.”

Kennedy served from freshman to sophomore year with Ad7, mainly giving announcements and prayer updates, but also preaching several times. “It became a formative time for me; the upperclassmen became friends of mine,” shared Kennedy, who became a Christian at Cedarville his freshman year. “As a newer believer, just starting to grow, it helped me tremendously to learn from others who were older than me. Just working under a deadline and thinking at a level I had not thought at before. It was a great discipling experience for me.”

Green, affectionately known as “PG” for Pastor Green, met with Ad7 to discuss the student-led church services. “PG was a huge influence on me,” noted Kennedy, who turned to Christ after sustaining a traumatic head injury playing intramural soccer. He was in a coma for several days at a local hospital, and Green visited him there. “From the time I woke up from the coma in my hospital room, he told me how this was no accident, that God had a plan.” 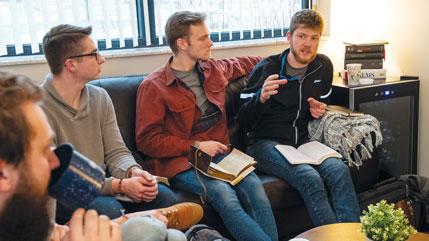 Green met with the Ad7 team like a senior pastor meeting with his staff, Kennedy explained. “There was just a lot of structure for me that was super helpful, especially early on,” he said. Several years later, Vice President for Christian Ministries Bob Rohm ’68 took over the leadership role with Ad7. Kennedy went on to become Junior Class Chaplain and then SGA Chaplain his senior year.

“I had the privilege of meeting weekly with Pastor Rohm, every Thursday morning at 9,” Farrell said, who presently serves as senior pastor at Grace Church in Morton, Illinois. “In our time together, he cared for me personally. He’d pray with and encourage me. He would give me feedback on my messages, not a scorecard. He was affirming and helpful.

Mark Hershey ’07, who served as SGA Chaplain his senior year, also received helpful counsel and insight from Rohm. “We talked more about personal things; it was a time of accountability,” he said. “We met on a weekly basis, checking in on how I was doing, discussing the pressure of the responsibilities.”

One of the lasting lessons has been to rest in Christ and depend on Him. “It wasn’t about my abilities, or what I could or couldn’t do,” said Hershey, who currently serves as Pastor of Adult Ministries at Hope Community Church in Andover, Kansas. “God had called me, and He was going to work through me.”

The history of Cedarville student-chaplains is the story of intentional mentoring that goes beyond crafting of messages to the very heart of ministry, which begins with a cultivated devotion and honesty with Jesus and with fellow believers.

"How are we growing in our time in the Word, so that can be an outflow of what we’re doing on campus, not just on stage or in our leadership roles, but in our everyday lives."

They are joined on occasion by Jeremy Kimble, Assistant Professor of Theology, and Jon Wood, Vice President for Student Life and Christian Ministries. With the council, the chaplains have the opportunity to preview messages and receive feedback, debriefing after sermons are delivered. But more than anything, the chaplains have found the council a place to soak in the grace of God.

“It’s just a blessing to have that time to come together as people who are doing the same thing on campus, sharing that same role, who know what the trenches of that ministry look like, and the spiritual warfare we face when preparing a sermon, then being able to encourage and support each other,” said Bortel.

“Sometimes we talk about sermons that are coming up or have someone walk through what they’re going to be talking on, and we’re offering some feedback,” Bortel added. “But for the most part it’s what God’s doing in our lives right now, going around and sharing that to just encourage each other, that this is what’s fueling our outpouring, and we’re holding each other accountable to do that.” What they’ve formed is a band of spiritual brothers. “Aaron’s good at talking about life with us — let’s talk real here and get to know each other,” noted Schlabach. “Sometimes that’s lighter things, and sometimes deeper, but what hit me is Aaron saying that we want to pursue holiness. How are we growing in our time in the Word, so that can be an outflow of what we’re doing on campus, not just on stage or in our leadership roles, but in our everyday lives: in the classroom, on campus, and in our own spiritual lives as well.”

“Aaron likes to say that he wants our private abiding to fuel our public adoration,” said Tiell. “That means almost every week we’re talking about what we’re learning in the Scriptures and in our private quiet times, what God’s teaching us, how we’re growing, and even how we’re struggling and how God is pulling us through that. That’s for us but also for the people we get to minister to. The deeper we know God, the deeper we can push people to know God.”

“We seek to have a time there where we’re talking about our spiritual disciplines, sharing about what God is teaching us in the Word, sharing our stories of how God brought us to Christ, and how he’s growing us now, and then seek to push one another toward Christlikeness,” Cook affirmed. 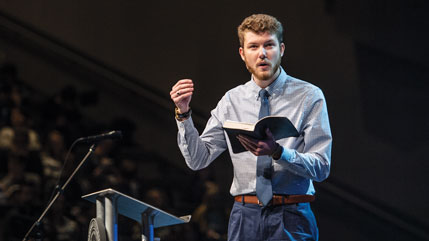 “This is an intentional partnership between Student Life and Christian Ministries and the School of Biblical and Theological Studies,” noted Wood. “It shows curricular and co-curricular cooperation in a really beautiful way. That’s unique to Cedarville.”

For instance, all chaplains are encouraged to take Kimble’s first Text-Driven Preaching course, but SGA chaplains in particular are required to take the class before they can serve in that role. Students taking Kimble’s class are required to prepare and deliver two messages. They meet with Kimble prior to and after they speak to get feedback. There are also extra measures taken to help the chaplains develop their skill at receiving critique and evaluating and offering feedback.

“This is an intentional partnership between Student Life and Christian Ministries and the School of Biblical and Theological Studies. It shows curricular and co-curricular cooperation in a really beautiful way. That’s unique to Cedarville.”

“When Jon Wood and I preached earlier this semester in chapel, we came to the Chaplains Council and critiqued each other’s messages as a way to model this process to the students,” Kimble said. “If you’re going to receive constructive criticism, how do you receive it, how do you learn from it, and how are you able to move forward in your preaching capacities?

“As well, it was a way to show how to critique and say things lovingly. How am I building up my brother to help him become a better communicator and preacher? I thought that was a good time where the student chaplains hopefully saw us be able to receive and give feedback and have it be done in a healthy way.”

With all this input, feedback, accountability, and encouragement, it’s hoped that each chaplain will grow as a minister of God’s Word, but even more as a servant-leader whose character and focus on Christ are true no matter what venue they find themselves ministering in.

"Whether I’m a preacher, an interim pastor, serving in church leadership or worship ministry, these experiences are developing my character and a skill set for preaching that is going to benefit whatever church congregation I’m in."

“Kimble and Cook both talk about not letting your abilities outpace your character,” Tiell said. “It’s scary to walk up on that stage, and think I could very easily walk off and completely destroy my witness by being foolish.”

“Aaron said it best: It’s the little things that usually make the biggest impact,” Schlabach said. “I believe I’ve been called to ministry. Going into that church role, you get up there and preach every Sunday, but most are watching you outside of that. That’s something I’m being prepared for.”

“I don’t know what ministry God has for me exactly,” noted Bortel, who is a geology major and the only non-Bible major serving in a chaplain’s role this school year. “But whether I’m a preacher, an interim pastor, serving in church leadership or worship ministry, these experiences are developing my character and a skill set for preaching that is going to benefit whatever church congregation I’m in.

“This training of refining who I am and what I believe, my character and my skills for discipling and preaching, all these things are going to be valuable, whether or not I’m a pastor. Those are valuable because everyone’s got to share their faith at some point if you’re living out the commands of Scripture.”