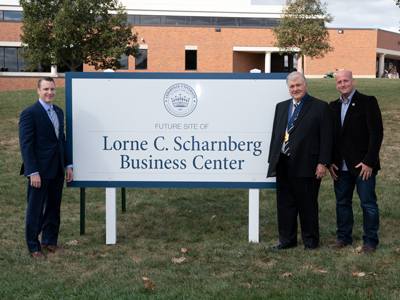 At its October 3 meeting, the Cedarville University board of trustees approved the naming of the new Lorne C. Scharnberg Business Center, reviewed and updated new student scholarships, added three new members to its board ranks, approved 10 faculty hires, and authorized construction of a storage warehouse.

The trustees approved the naming of a future business and conference center in honor of three-term chair of the board and tireless advocate for Cedarville, Lorne C. Scharnberg. Cedarville is currently in the midst of a 10-year master plan that includes a new facility for the school of business administration, along with five other new or expanded buildings on campus. The business building is expected to be located on Cedar Lake between the Dixon Ministry Center and the Stevens Student Center. Architectural planning is expected to begin this spring.

Dr. Thomas White, president, announced the trustees’ decision to name the future home for the business school during the annual State of the University address on October 4. “I am thrilled to announce that our new school of business building will be named the Lorne C. Scharnberg Business Center,” said White. “For years to come, there will be a stone of remembrance on this campus to celebrate all that Lorne Scharnberg and his family have done to further the mission and vision of Cedarville University. For years to come, future generations of business leaders will be trained to use their gifts for God’s glory, the good of mankind and for their joy.”

Prior to announcing the name of the new business building, White announced a $10 million pledge to the university from Mark Scharnberg ’97, on behalf of the Scharnberg family and Katecho and Surmasis Pharmaceuticals of Des Moines, Iowa. When made, this was the largest single pledge to the university in its 132-year history, made in honor of Lorne Scharnberg, who served for three terms as chair of the board of trustees.

The university’s investment in scholarships has increased by $15.1 million, or 33%, in the past five years.

● Timothy Knight, senior advisor at Arsenal Capital Partners and president of Knight & Associates Consulting, LLC., was also approved as a trustee. He earned a Bachelor of Science degree from the United States Military Academy at West Point and a Bachelor of Arts and master’s degree from Oxford University in England.

● Jonathan Price, chief executive officer at CBC Companies in Columbus, Ohio, will also join the board of trustees. He earned a bachelor’s degree from Cedarville University.

The board approved the hiring of 10 faculty members:

Davis earned a bachelor’s degree in biology from Cedarville University and a master’s degree in environmental science from Taylor University. He previously worked at Northwest Indian College since 2011.

Shenk earned her Doctor of Pharmacy degree from Cedarville University. She completed a postgraduate residency at Eskenazi Health System in Indianapolis.

Veenstra earned his doctoral degree in biochemistry at the University of Windsor (Canada) and bachelor’s degree in chemistry from Trent University (Canada). Since 2015, he served as chair of the applied science department at Maranatha Baptist University.

Wagner earned her Master of Social Work degree from Boise State University and her bachelor’s degree in social work from Cedarville University. Since 2016, she worked as a crisis assessment specialists at Dayton Children’s Hospital.

With Cedarville’s continued growth, additional space for the university’s physical plant is needed. Trustees approved the construction of a 6,000-square-foot warehouse with a loading dock. The facility will open in summer 2020. The construction will take place along with three other student and academic projects: a new Chick-fil-A dining commons adjoining Centennial Library, a nearly 300-bed residence hall on the north side of campus, and a new civil engineering laboratory and office building.

Cedarville University is a Christ-centered, Baptist institution with an enrollment of 4,380 undergraduate, graduate and online students in more than 150 areas of study. Founded in 1887, Cedarville is recognized nationally for its authentic Christian community, rigorous academic programs, strong graduation and retention rates, accredited professional and health science offerings and leading student satisfaction ratings. For more information about the University, visit www.cedarville.edu.