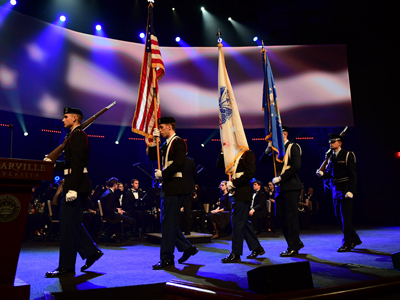 Cedarville University will honor veterans and active-duty military from all branches of the military at its annual Veterans Day program on Monday, Nov. 11, at 10 a.m. in the Dixon Ministry Center. Dr. Jeffrey Haymond, dean of the school of business administration at Cedarville University, will be this year’s speaker. The program is open to the public.

“We are privileged to have a number of veterans who serve on our faculty at Cedarville, and I appreciate their willingness each year to be a part of this very important chapel,” said Dr. Chet Jenkins, assistant professor of music and organizer of the event.

This Veterans Day will mark the 75th anniversary of the Normandy invasion, also known as D-Day. The event will commemorate D-Day by looking through history and recognizing the challenges and accomplishments that veterans have faced over the years through the lens of Normandy.

"We recognize that there are some who are here because of the sacrifice of another. And we honor them all.”

“Their commitment brings to mind the words of Jesus in John 15:13, ‘Greater love has no one than this, than to lay down one’s life for his friends’” said Jenkins. “So we recognize that there are some who are here because of the sacrifice of another. And we honor them all.”