Why Is Brexit a Big Deal? UK-born Professor to Explain 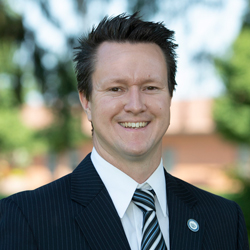 Dr. Glen Duerr, associate professor of international studies, will speak March 12 on the United Kingdom’s (UK) plan to leave the European Union (EU). The program begins at 7 p.m. and will be in Cedarville University’s Center for Biblical and Theological Studies. It is free and open to the public.

Duerr is a citizen of three countries. Born in the UK, Duerr moved with his family to Canada as a teenager, and then to the United States to obtain his doctoral degree. His teaching and research interests include nationalism and secession, political violence, including nuclear weapons and terrorism, and Christianity and politics.

At the event, Duerr will present a brief history of the EU, a political and economic alliance consisting of 28 European countries, and why many British people want to leave it. There will be a Q&A time at the end.

“People may think that Brexit is over there and we are removed from it, but this decision has global impacts on the economy.”

Brexit is a combination of the words “Britain” and “exit.” In June 2016, British voters opted to leave the EU, which is scheduled to occur March 29. This date could be delayed, but the UK is expected to finalize a deal to leave the EU before this date. Duerr’s talk on March 12 will occur at a time when the House of Commons will likely vote on a final deal and decide how the UK will exit, or whether a delay is necessary.

Duerr emphasized that Brexit is a complex issue with numerous international implications.

“People may think that Brexit is over there and we are removed from it, but this decision has global impacts on the economy,” he said. “The UK has the fifth-largest economy in the world. The UK is America’s eighth-largest trade partner, and a lot of American businesses have a headquarters in London.”

Located in southwest Ohio, Cedarville University is an accredited, Christ-centered, Baptist institution with an enrollment of 3,963 undergraduate, graduate, and online students in more than 150 areas of study. Founded in 1887, Cedarville is recognized nationally for its authentic Christian community, rigorous academic programs, strong graduation and retention rates, accredited professional and health science offerings, and leading student satisfaction ratings. For more information about the University, visit www.cedarville.edu.