A Time to Come Together

In the midst of the COVID-19 pandemic, the U.S. also found itself in the middle of a historic and culture-shaking response to the death of George Floyd in Minneapolis. The protests that followed provoked a national conversation about race and racial justice.

This summer, the Cedarville community looked closely at the biblical perspective on race and ethnicity and rearticulated its historic stand against racism, and to affirm the value of each person as an image-bearer of the one true God, for whom He sent His Son to redeem and reconcile.

The stories included here reflect on this difficult and transformative time. 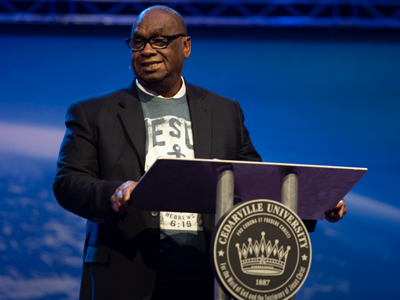 This fall, Cedarville honored its first African- American student, James D. Parker, Sr. ’64, by naming the men’s wing of its newest residence hall after him. Also honored were Pat Bates, former Dean of Women, for whom the women’s wing is named, and George Dunn, who is remembered with the Dunn Center at the center of the residence hall. He served as the first Chairman of the Board of Trustees for Cedarville College after the merger with the Baptist Bible Institute in 1953.

A naming and dedication ceremony took place August 7, a week before Getting Started Weekend.

As Cedarville prepared to celebrate Parker, the country once again found itself torn apart by racism. “We live in a sad time,” said Parker, who lives in Syracuse, New York, with his wife, Mary. “It seems like we’re going backward in a lot of things.”

Before arriving at Cedarville, Parker served four years in the U.S. Air Force. It was during his days in the military, in 1952, that he went to a Youth for Christ meeting and accepted Christ as his Savior.

As the first African- American student at Cedarville, community was a big part of his experience. “When I first came to Cedarville, I had a private room, but I was never lonely,” he said. “Every night I had to run guys out of the room so I could go to sleep. Everyone was always hanging out in my room.”

His white classmates also learned lessons about being black in America. “I remember one time four or five of us went out

to eat,” Parker said. “The restaurant wouldn’t serve us because I was black. We went somewhere else.”

Although he was welcomed with open arms by most at Cedarville, there were some who questioned a minority student enrolling at the college. Then-President James T. Jeremiah quickly addressed those questions. Students doubting whether Parker should attend had two options: accept it or withdraw.

“Dr. Jeremiah made sure I was welcomed with open arms,” Parker said. “I never had a problem during my time at Cedarville. Dr. Jeremiah had a lot to do with that. He was a great man.”

"We have to be Christians first, not white or black. And we have to be honest with each other."

But for the most part, Parker found acceptance and encouragement. He was well liked by his classmates, who voted him Vice President of the freshman class and Chaplain during his sophomore year.

From those days, Parker has seen progress in race relations. “There were a lot of things done that have been corrected, but there’s still more that needs to be corrected,” he said. “We have to be Christians first, not white or black. And we have to be honest with each other. We’ve been sweeping it under the rug, and that rug is overcrowded and spilling out.”

Parker earned a degree in history at Cedarville before embarking on a decades-long career in ministry that included planting churches in Washington, D.C., and Cleveland, Ohio. For the last five years, he has served at Central Baptist Institute in Syracuse, an extension of the ministry of Central Baptist Church, pastored by Parker’s son-in-law, Milton Kornegay.

“I feel so undeserving of being honored this way,” Parker said regarding the naming of the residence hall. “I appreciate the courtesy and honor of those who nominated me for this great honor, and I trust I will continue to be a credit to Cedarville.”

For current students who will live in the residence hall that bears his name, Parker’s hopes mirror his hopes for the nation.

“I hope they develop a love for one another,” he said. “That they’ll learn to listen to each other, and to consider the other person’s viewpoint.”

On August 18, Cedarville faculty, staff, and students humbly sought the Lord together during a prayer service for racial unity. Cedarville President Thomas White began the service, emphasizing there is no place for discrimination or racism of any kind at Cedarville, and the University should strive to continue being a place where “all children of God feel embraced, welcomed, and at home.”

The prayer service was organized by the Kingdom Diversity Team, which was formed over the summer.

“Biblical diversity is a part of living out our faith, and that’s what Cedarville is preparing students to do,” commented Derrick Green ’98, Chair of the Department of Communication and team chairperson. “The best way for us to start is through prayer.”

According to Green, the recent social unrest around the country contributed to the need for this conversation, but it’s a conversation that ultimately is happening because of Cedarville’s core identity.

“We can celebrate our differences because the Gospel unifies us as one. We’re all on level ground at the foot of the cross.”

As a multiracial man of Caribbean descent whose academic pursuits explore the biblical position on diversity, Mark Owens, Assistant Professor of New Testament Theology, has plenty of interest in the subject. But he is also the father of an adopted multiracial daughter.

“I love Cedarville and all of the students here,” Owens commented. “Because I love Cedarville, I’ve tried to do whatever I could to support minority students and international students in and out of the classroom. And I would love for my daughter to be a student here someday, at a place where she is valued, honored, respected, and loved.”

The prayer service for racial unity is just the first step in the Kingdom Diversity Team’s efforts to talk about and promote diversity on campus. This team will plan future diversity-related events and recommend policy improvements.

To advance the biblical value of diversity at Cedarville, nine members of the campus community have been asked to serve on the Kingdom Diversity Team. These individuals represent students, faculty, and staff and come from a wide array of disciplines and departments.

At its fall meeting, the Board of Trustees approved a new diversity scholarship that honors the faithful service of Dr. Deforia Lane, a member of the University Board since 1997. Lane served as the Director of Music Therapy at University Hospitals of Cleveland, Seidman Cancer Center, and Rainbow Babies & Children's Hospital. She earned her Ph.D. in music education from Case Western Reserve University.

Beginning fall 2021, the Dr. Deforia Lane Diversity Scholarship will be awarded annually to select undergraduate students seeking to enhance the Cedarville community through their personal experience and appreciation for racial, ethnic, and cultural diversity. The new scholarship was recommended by the University’s Kingdom Diversity Team. For more information, visit cedarville.edu/lanescholarship.

In the days following the death of George Floyd, the University reaffirmed its commitment to biblical justice and racial equality. That statement follows here:

We have been deeply grieved by the events that have transpired in our nation. 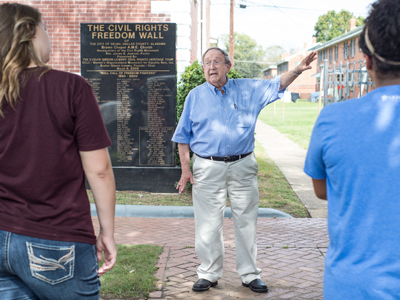 In considering a response, we begin with a word to our African-American students, faculty, and staff, our dear brothers and sisters in Christ. We affirm our love and care for you as fellow image-bearers. We pray for you and stand with you, eager for and working toward the day when we see men and women of all ethnicities and race living out the unity that is ours because Jesus has torn down the “dividing wall of hostility” (Eph. 2:14).

We turned to J. Murray Murdoch to give expression to the anguish we feel in our souls and the hope that exists only in Jesus Christ. Many of you have sat under Murdoch’s teaching; some of you have traveled with him on the Civil Right Bus Tour. As Distinguished Professor of History and a 55-year member of our faculty, he has stood boldly for decades, articulating clearly and compellingly a Christian response to the evils of racism.

Contemplating these recent events, Murdoch shared the following words. They reflect the heartbeat of Cedarville University and each member of our leadership team:

“From my arrival at Cedarville in the fall of 1965 until today, we have sought to live by the statement that we stand for the Word of God and the Testimony of Jesus Christ. You cannot live with that as your motto and not be devastated by the recent events in our nation. I was devastated as I watched the life slip out of George Floyd’s body as he was choked by a police officer’s knee. My thoughts were, ‘That could have been one of my students. That could have been one of my grandchildren.’

“The Word of God cries out against the sin of racism. God tells us that all people — “all nations, tribes, peoples, and tongues” — are welcome in the family of God (Rev. 7:9).

“Dr. Martin Luther King, Jr., has said, ‘Injustice anywhere is a threat to justice everywhere.’ As a University family committed to biblical justice, my prayer for our community is that we open our arms in love to all peoples and reflect the diversity of the Kingdom of God here at Cedarville University.”