"All My Sons" Performed with COVID in Mind 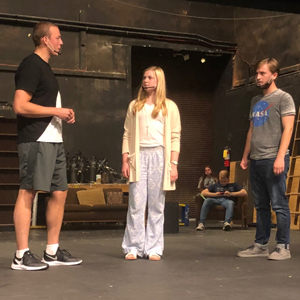 Cedarville University’s theatre department will present “All My Sons,” opening on October 1 in the DeVries Theatre in the Stevens Student Center. The play will run through October 11. Tickets are available by calling the box office at 937-766-7787.

Written by Arthur Miller, “All My Sons” is set in the time shortly after the end of World War II and chronicles the Keller family’s life during this period. Two of their sons volunteered for the U.S. armed services, but only one returned. Larry, the younger of the two, was missing in action and presumed dead, leaving behind his girlfriend, Ann.

At the start of the play, three years have passed since Larry’s plane went down. His mother Kate clings tightly to the idea that her son will return one day, refusing to believe that he is, indeed, dead.

“You can’t just go along with what everybody else is saying; you’ve got to come to your own conclusion.”

Now that her older son, Chris, has accepted the harsh reality and has invited Ann to their home to ask for her hand in marriage, Kate is even more determined for her family to agree with her that Larry is somehow still alive.

The plot thickens as the audience learns of a family scandal involving the sale of faulty aircraft parts that caused the death of 21 military pilots. Ann’s father is in prison because of his role in covering up the crime, leading her brother to approach the Kellers with a new take on what really happened.

“One thing I’ve learned from the play is to make your own judgments of people,” said Haleigh Compton, who plays Lydia, one of the Keller family’s friends and a supporting character to the show. “You can’t just go along with what everybody else is saying; you’ve got to come to your own conclusion.”

The theatre department has carefully followed the recommendations of University Medical Services in staging the drama. “We have adopted a tremendous amount of precautionary procedures to keep our students healthy throughout this process,” Stacey Stratton, assistant professor of theatre and the play’s director, assured.

Understudies have been cast for each role in case a student has to be quarantined or isolated during the production period. “We keep our students spaced out, schedule only a few actors to work onstage at a time and regularly sanitize our performance space,” said Stratton.

“We wear mini-face shields on stage,” said Teghan Reed, who is Compton’s understudy. “They won’t inhibit our acting as much, but we’re still staying safe. For the performances, we will not be wearing masks.”

“There were many people dedicated to helping us find a way to get our students on stage this year,” Stratton shared. “We bathed it all in prayer as we sought the Lord’s plan in this unprecedented season. God has been faithful to see us through the rehearsal period safely, and we trust Him to continue to see us through our performances.”

Located in southwest Ohio, Cedarville University is an accredited, Christ-centered, Baptist institution with an enrollment of 4,550 undergraduate, graduate and online students in more than 150 areas of study. Founded in 1887, Cedarville is recognized nationally for its authentic Christian community, rigorous academic programs, including Bachelor of Arts in Theatre program, strong graduation and retention rates, accredited professional and health science offerings and high student engagement ranking. For more information about the University, visit www.cedarville.edu.