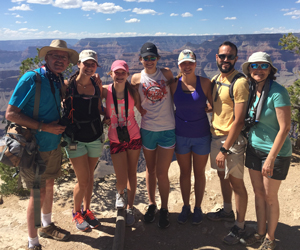 Marci Gabrielse, a junior social work major at Cedarville University, almost lost her father to tongue cancer. This traumatic experience sent her on a faith journey that made her ask herself if she was willing to lose everything to serve her heavenly father.

Gabrielse grew up in a Christian home with her parents and three siblings in Houston, Texas. Her parents made a point to keep family high on their priorities by spending time together, mostly outdoors, but there were problems.“I quickly realized that our family dynamic was not perfect,” said Gabrielse.

Her father, Michael Gabrielse, was a heavy drinker, which caused division in his relationship with Gabrielse’s mother, Jane Gabrielse, and the rest of the family for several years.

“Throughout the whole process he was sharing the gospel with nurses.”

Gabrielse sees now how God’s grace and help was with the family throughout the years and still today. “I thought every marriage consisted of parents yelling at each other,” she said. “Since then, God has done incredible things with my dad. He has grown over the past few years, and I am so incredibly proud of him.”

Gabrielse’s father was diagnosed with tongue cancer five years ago. During this time, he had surgery to remove half of his tongue to eliminate the cancer. As part of his treatment, he was exposed to high levels of radiation, which weakened his jaw. Gabrielse’s father had been cancer free for several months before Gabrielse began attending Cedarville University.

As a Cedarville student, Gabrielse has made strong friendships and been welcomed into a Cedarville family like she was one of their own. These relationships sustained her during her absence from family, especially her dad.

Fast forward to the summer of 2019. Gabrielse’s father took a turn for the worse. He was taken to the hospital after experiencing constant ear pain and terrible balance problems. Doctors discovered he had cancer again.

Another surgery was scheduled to get rid of the cancer, but this time they were told that it was possible that he would never speak, sing or taste food again. On July 19, Gabrielse’s family waited while her dad underwent a 12-14-hour surgery. They received a call after three hours telling them the surgery was finished and there had not been as much cancer as originally thought. This was a major answer to prayer.

Several days later, her father began coughing up blood. Gabrielse, along with her sister and mom rushed her father to the hospital.

“I honestly didn’t think he was going to make it,” said Gabrielse. “My little sister was even more scared.”

The doctors took him immediately into surgery. After almost losing him, the doctors informed Gabrielse that he had lost 1 1/2 liters of blood, roughly equivalent to a third of the amount in his body. Blood had been gathering in his lungs for six days since his original surgery. The surgery was successful, and he was kept in the ICU for several days.

“My dad is so amazing. Throughout the whole process he was sharing the gospel with nurses,” said Gabrielse. “My dad is such a testimony of God’s faithfulness in our lives.”

After experiencing this hard summer, Gabrielse started her junior year at Cedarville.

“I love the song that says, ‘break my heart for what breaks yours,’” said Gabrielse. “This is ultimately why I changed my major, because these are the type of people that I want to work with and I want to truly follow God’s plan for my life.”

She credits Cedarville chapel, faculty and friends for encouraging her amidst a very hard time in her life. Cedarville people were a constant source of encouragement even during the summer.

“When we sing the song “Take Everything,” I think of my family and my dad,” she said. “I have to ask myself if I am okay with singing this song because I cannot sing it unless I truly mean it.”