Alumnus is One of First COVID-19 Plasma Donors 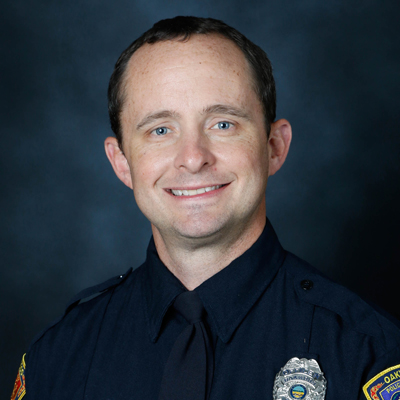 When Oakwood police officer, firefighter and emergency medical technician Steve Norris became ill with COVID-19, he had no clue that he would be able to bless someone else.

Norris, a 2001 Cedarville criminal justice graduate and a 2020 Master of Ministry graduate, came down with the novel coronavirus in March. He tested positive for COVID-19 at the University of Dayton. He self-quarantined and recovered.

Then he heard about an area cardiologist who became critically ill with the coronavirus and learned the plasma from recovered patients may help him.

Norris had given plasma only once before, but this need was immediate, and he was one of only a handful of people who might be able to help.

“I knew there had not been that many confirmed COVID-19 cases in the (Miami Valley) area,” said Norris, from Troy, Ohio. “I realized the pool of donors was probably not very large.”

““God does all things for our good and the good of others. I became sick with COVID-19 and came out the other side. Now I could be used to help someone else. I am grateful for this.”

Norris admitted he’s no fan of needles. “But how do you not donate when you know how much it might help someone?” he said. “I spend all day helping people; this just made sense. It would have been the supreme act of selfishness not to give.”

Norris called the Community Blood Center (CBC) in Dayton about donating his plasma. When he arrived on the morning of April 14, he was met by Mark Pompilio, the CBC’s marketing and public relations manager. The CBC and Miami Valley Hospital had just officially launched a program April 10 to collect coronavirus convalescent plasma (CCP), and he was one of the first donors.

“He was one of our front runners,” said Pompilio. “Steve’s a great donor and a great public servant. For so many of these people, some who have never donated plasma before, to go from having a serious illness to doing this of their own accord, what a positive action to take. And they’re doing so with a sense of urgency.”

Norris’ plasma ended up not being a match for the doctor in need, but he’s still glad he donated. He recently received notification from Kettering Medical Center the plasma had been given to help another patient.

“God does all things for our good and the good of others,” he said. “I became sick with COVID-19 and came out the other side. Now I could be used to help someone else. I am grateful for this.”

Located in southwest Ohio, Cedarville University is an accredited, Christ-centered, Baptist institution with an enrollment of 4,380 undergraduate, graduate and online students in more than 150 areas of study. Founded in 1887, Cedarville is recognized nationally for its authentic Christian community, rigorous academic programs, including the Bachelor of Arts in criminal justice and Master of Ministry programs, strong graduation and retention rates, accredited professional and health science offerings and high student engagement ranking. For more information about the University, visit www.cedarville.edu.