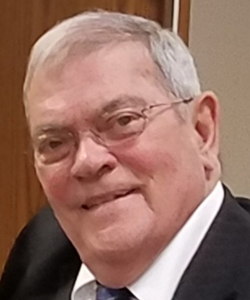 When Ty Bryant speaks during an upcoming webinar for current and future entrepreneurs, he won’t just be speaking as a biomedical inventor and business founder. He will also be there as an Ohio health care hero.

The Beyond Entrepreneurial Accelerator Investor Impact virtual event will be held Friday, June 12, at 10 a.m. on Zoom. The webinar is free and open to the public.

Bryant, a 1964 alumnus of Cedarville University, is the founder and president of Visioneering Bio Design, which develops smartphone apps that alert caregivers when in-home patients need assistance with medical devices that are part of their ongoing care.

“I wanted to do my part to help the country cope with this pandemic that was devastating the nation.”

But when the coronavirus hit, Bryant was moved by calls from U.S. President Donald Trump for private industry to help battle the COVID-19 public health crisis. Then he heard from a friend whose packaging company had shifted production to making face shields, but wasn’t sure how to connect supply with demand.

“When they called, I told them I’d give it my best shot,” Bryant said.

Bryant began reaching out to potential customers for the face shields, including the state of Ohio. “I had no comprehension of what lay ahead of me in terms of the complexity and bureaucracy,” he said. “But I wanted to keep my promise, and I kept moving forward.”

Although Bryant was a volunteer, he attacked the sales efforts like a man on commission. He doggedly reached out to the state of Ohio until, as he put it, he got a “nibble.”

He contacted the chief procurement officer in the office of procurement services for the state of Ohio, who serves on Gov. Mike DeWine’s coronavirus task force.

“She told me they wanted to purchase 600,000 face shields, but she didn’t say who would get the order,” he said.

Bryant reached out to the manufacturer for samples, and he went the extra 90 miles, again all as a volunteer, driving the face shields to Gov. DeWine’s Cedarville home, leaving them in a bag on the back porch. That was the morning of Saturday, April 4.

By that evening, he had a verbal order from the state for 600,000 face shields. Bryant received a written order the following Tuesday, but was also asked if the face shields had been certified by the U.S. Food and Drug Administration (FDA).

“I believe I hold the world’s record for getting an FDA approval,” he said. “I had the FDA certification by Wednesday, and I sent it to the state immediately. The original verbal order increased to one million.”

“I love selling and marketing, but I also believed in these face shields, that they could save lives,” he said. “I wanted to do my part to help the country cope with this pandemic that was devastating the nation.”

Located in southwest Ohio, Cedarville University is an accredited, Christ-centered, Baptist institution with an enrollment of 4,380 undergraduate, graduate and online students in more than 150 areas of study. Founded in 1887, Cedarville is recognized nationally for its authentic Christian community, rigorous academic programs, including its Master of Business Administration program, strong graduation and retention rates, accredited professional and health science offerings and high student engagement ranking. For more information about the University, visit www.cedarville.edu.