Assistant Dean Back Where She Started 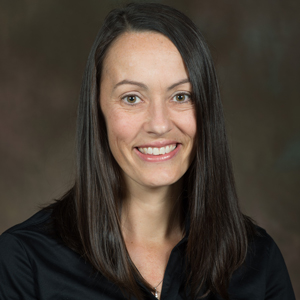 This past June, Ferguson received a call from the dean of education, Dr. Kevin Jones, asking if she’d be willing to take on an additional role.

“Dr. Jones wanted to know if I would consider being the assistant dean,” Ferguson shared. "I took time to talk and pray with my husband and other mentors in my life before answering yes."

“At Cedarville, we don’t just teach our students to teach — we teach them to impact the world.  We get to watch our alumni travel all around the world and be the light. It’s more than just teaching here; it’s a calling.”

Since the advent of the COVID-19 pandemic, Ferguson’s impact on the university has grown even further. Working with Cedarville’s goals of creating a remote university visit experience for prospective students, one of Ferguson’s courses, middle childhood teaching mathematics, is among the select classes that have been recorded and made available to view online.

As she presses on in what seems like a career of transitioning roles, Ferguson is happy to be at Cedarville and pouring into the world’s future Christian educators.

“At Cedarville, we don’t just teach our students to teach — we teach them to impact the world,” Ferguson shared. “We get to watch our alumni travel all around the world and be the light. There will be students I have in class in November that, a year later, are teaching doctors’ kids on a Mercy Ship in Africa or missionary kids on another continent. It’s more than just teaching here; it’s a calling.”

Though firmly within her position now, Ferguson’s journey back to Cedarville is one with many twists and turns.

When she graduated in 1998, Ferguson originally wanted to be a second- or third-grade public school teacher.

“I grew up in public schools, and I always loved my Christian teachers,” Ferguson said. “I wanted to be a light like them.”

She spent the next eight years in public education, teaching third grade at Cedar Cliff Elementary School and eighth-grade mathematics at Baker Middle School in Fairborn, Ohio. Ferguson also completed her Master of Science in education and allied professions from the University of Dayton, which qualified her to mentor first-year teachers.

Ferguson stepped away from teaching in 2006 when she and her husband learned they were expecting a child. Though a difficult decision, it was more important for her to step out of the classroom and a full-time teaching position to be at home with their daughter, Ellianna.

“I was fully home for a year with my daughter, and then I got a call from Dr. Sue Baker that changed the direction of my professional life,” Ferguson shared.

Baker, professor emerita of education at Cedarville, had undergone surgery and reached out to Ferguson about teaching some of her courses.

“Dr. Baker and I had maintained contact over the years, so when she asked if I would come teach, I said yes,” Ferguson noted. “The students had positive things to say, so I was asked if I would come back again as a student teacher supervisor in 2007. The following year, I was asked to teach a course as an adjunct, so I did that and student teacher supervision for two days a week until 2011, when I was offered a position as an instructor.”

Ferguson also began her doctoral work in 2011 through the University of Cincinnati.

The following year, in 2012, she and her husband welcomed their second child — a son, Micah.

For the next eight years, Ferguson continued as a full-time instructor while pursuing and eventually completing her doctoral degree. She earned her Doctor of Education in curriculum and instruction: teaching mathematics in August. Then, this past June, her career path shifted again when she accepted the offer to be assistant dean.

Now, Ferguson is hard at work within the school of education, teaching courses, helping students orient their schedules, and delving into professional development.

Located in southwest Ohio, Cedarville University is an accredited, Christ-centered, Baptist institution with an enrollment of 4,550 undergraduate, graduate, and online students in more than 150 areas of study. Founded in 1887, Cedarville is recognized nationally for its authentic Christian community, rigorous academic programs, including its Bachelor of Arts in Primary (P-5) Education program, strong graduation and retention rates, accredited professional and health science offerings and high student engagement ranking. For more information about the University, visit www.cedarville.edu.