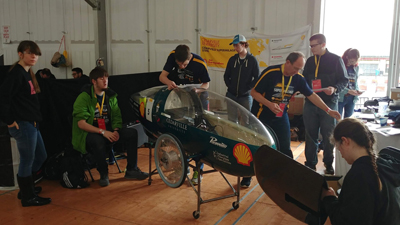 “Dr. Zavodney is a great mentor with an incredible eye for detail,” said Sarah Seman, a senior molecular and cellular biology major from Delmont, Pennsylvania, referring to mechanical engineering professor and team advisor Dr. Larry Zavodney. “That combined with the dedication and time put in by the student team has led to a really beautiful and effective car.”

The top prize for the Eco-marathon goes to the team that uses the least amount of fuel to complete a 6-mile course averaging at least 15 mph.

“Sting stands out at competitions.  Not many cars have the wheels on the outside of the body.”

Shell hosts their Eco-marathon worldwide but, due to concerns about the spread of COVID-19, canceled its 2020 on-track races in North and South America — where Cedarville competes — and Europe.

This is the first year the team nominated Sting for any off-track awards. At last year’s Shell Eco-marathon in Sonoma County, California, one of the judges approached the team about submitting the car for a design award. With that feedback, it was a priority to enter this year.

The pandemic meant this was the only way Sting would get to compete this year. Even though this is the first official award Sting has received, people have been noticing the car since its debut in 2011. Shell takes one car from each of its three worldwide races and puts it on the cover of their rulebook.

Sting was chosen to represent the Americas race for the 2017 and 2018 rulebook. “Sting stands out at competitions. Not many cars have the wheels on the outside of the body,” said Ice. “The report that we submitted also contained as much detail as possible and was very well done, which is why Sting won.”