God's Defeat of Darkness is Focus of Book 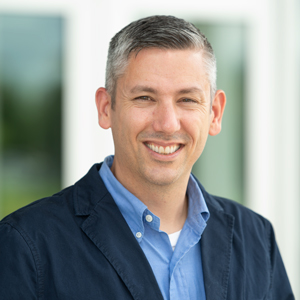 Dr. Dan DeWitt, Cedarville University’s director of the Center for Biblical Apologetics and Public Christianity and associate professor of applied theology and apologetics, will debut his third children’s book this fall. “The Bright Light and the Super Scary Darkness” is scheduled for release on October 27.

As a recurring theme in all kinds of religious and general entertainment, DeWitt found the fight between light and darkness to be the perfect way to communicate the big picture of the Bible to children.

“I don't want children to just think, ‘God is in control, so I don't have to be afraid of the dark,’” explained DeWitt. “But I want them to know that God is going to defeat all the darkness in the world one day, and that is their hope in life.

“My goal is for children and parents to see every story of the Bible as fitting into the motif of God speaking light and then defeating darkness.”

“My goal is for children and parents to see every story of the Bible as fitting into the motif of God speaking light and then defeating darkness.”

DeWitt wanted to focus on creation, the fall of man into sin, redemption and the promise of a new creation that will hopefully help children see how some of the shorter, less-known biblical stories fit into this grand narrative.

“I think most churches do a good job of telling children many of the big stories of the Bible,” he said. “Sometimes, however, kids don't have a framework to make sense of these stories so each event becomes some sort of morality lesson. Giving kids a big view of the Bible helps them to see the smaller stories in context.”

For example, DeWitt explained, instead of David defeating Goliath only being a lesson about courage, having a more extensive framework will help readers see how God in a larger way is defeating all of his enemies and rolling back the darkness. “Stories like that in the Old Testament are pointing forward to what God is going to do through Christ,” DeWitt said.

DeWitt collaborated with Rea Zhia, an illustrator from China, to create artwork that captivates children with the contrast between light and darkness without using the typical and predictable biblical imagery.

DeWitt’s first two children’s books have received national recognition. His first book, “The Friend Who Forgives,” was named the “book of the year” by Christianity Today and The Gospel Coalition. DeWitt’s second book, “Why God?,” was named one of the top picture books in 2020 by Focus on the Family.

Located in southwest Ohio, Cedarville University is an accredited, Christ-centered, Baptist institution with an enrollment of 4,380 undergraduate, graduate and online students in more than 150 areas of study. Founded in 1887, Cedarville is recognized nationally for its authentic Christian community, rigorous academic programs, including its Master of Divinity program, strong graduation and retention rates, accredited professional and health science offerings and high student engagement ranking. For more information about Cedarville University, visit www.cedarville.edu.