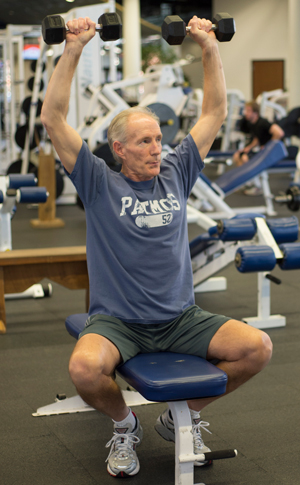 As a social work professional, Professor George Huff has helped people through trials: families struggling with the challenges of life, abuse victims struggling to recover and find hope. But one of the greatest trials George has encountered was his own.

George was riding his bicycle home from Cedarville on July 21, 2014, when a truck sideswiped him and he was catapulted into a field by the side of the road. Excruciating pain came upon him immediately. He was in and out of consciousness, vaguely aware that a good Samaritan had stopped to help him. He faintly heard emergency crews discussing the best way to transport him to a local hospital.

While in the hospital, he faced more trials and pain. Doctors found that his spleen had been shattered in the crash and unless they acted quickly, he would bleed to death. He spent two weeks in trauma care before George was released home, but more difficulties awaited him on his very long journey back to health.

Although George is certain he could have died several times, and even though he suffered greatly, his perspective is unwavering: God was watching his way, including in the accident, and the Lord has a plan even in this.

"Many of us won’t be hit by a truck, but we will feel like we’ve been hit by a truck. What should our reaction be? Are we going to give thanks?"

“Though I planned my paths that day to ride my bicycle, He directed my steps,” George offers in the podcast. “In 1 Thessalonians 5 it says, ‘Rejoice always, pray without ceasing, and give thanks in all things’ (v.16-18). Many of us won’t be hit by a truck, but we will feel like we’ve been hit by a truck. What should our reaction be? Are we going to give thanks? I want to give thanks for being hit by a truck.”

George shared about his accident and recovery in a video, which was shown during the 2014 Thanksgiving Chapel service.

Located in southwest Ohio, Cedarville University is an accredited, Christ-centered, Baptist institution with an enrollment of 4,550 undergraduate, graduate, and online students in more than 150 areas of study. Founded in 1887, Cedarville is recognized nationally for its authentic Christian community, rigorous academic programs, strong graduation, and retention rates, accredited professional and health science offerings, and high student engagement ranking. For more information about the University, visit www.cedarville.edu.