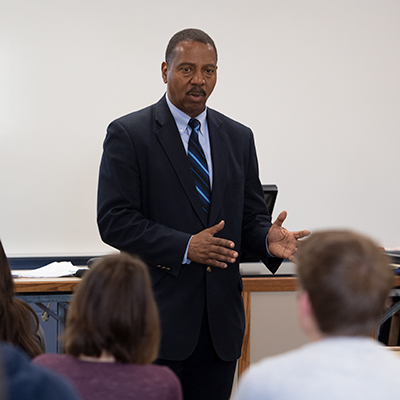 Patrick has served in numerous influential roles in law enforcement during a 27 ½-year career: Ohio State Highway Patrol, Cleveland Metropolitan Parks ranger chief, officer with the Cleveland Division of Police and then the first African-American police chief for the city of Cleveland. He has also served as chief for police departments in Grandview Heights, Ohio, and Fairborn, Ohio.

During the last 15 years, Patrick has been used of God to create Cedarville’s criminal justice program. From this program have come police officers, parole officers, intelligence analysts and forensic scientists committed to the safety and well-being of communities all around the country.

Patrick’s father, a career police officer, was a powerful example who influenced his career path. Ultimately, as Patrick shares, it was his Heavenly Father who instilled in him the passion to serve and protect. As Patrick says, “Law enforcement is what I was born to do.”

To hear more Cedarville Stories podcasts, click on the link below:

The National Organization of Black Law Enforcement Professionals, or NOBLE, is a mentoring program founded by Patrick.

When it comes to the main problem of humanity, “the heart of the problem is the problem of the heart,” Patrick says. He cites Jeremiah 17:9 for support.

Located in southwest Ohio, Cedarville University is an accredited, Christ-centered, Baptist institution with an enrollment of 4,380 undergraduate, graduate and online students in more than 150 areas of study. Founded in 1887, Cedarville is recognized nationally for its authentic Christian community, rigorous academic programs, including its Bachelor of Arts in Criminal Justice program, strong graduation and retention rates, accredited professional and health science offerings and high student engagement ranking. For more information about Cedarville University, visit www.cedarville.edu.