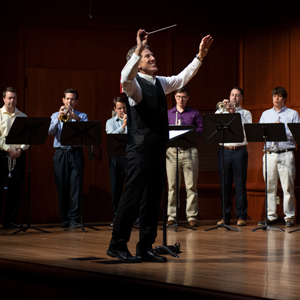 Charlie Pagnard has faithfully instructed students in trumpet, music, band, and orchestra for the last 43 years. Beyond the notes and scales, Charlie has also helped his students with the day-to-day decisions of faith. But if you ask Charlie, he’s amazed he’s had any impact for Jesus at all.

Charlie put his trust in Jesus at a revival when he was 12. By high school, he had drifted from his faith. He became proficient in trumpet, earning a full-ride scholarship at Bowling Green State University. The drift from the Lord continued as he toured with a rock band that opened for legendary 60s acts such as the Carpenters, Three Dog Night, and Gladys Knight and the Pips.

“My decisions early on should have ended up in ruin. I shouldn’t have had the wonderful marriage I have now or have the two sons I have."

After she gave birth to their first son, his wife, Elaine, put a choice before Charlie: Will you come home or stay on the road? Under a strong conviction from the Lord, he left the band and pursued a music education career, which eventually led him to Cedarville.

Although Charlie is a fantastic and gifted musician, he points to the spiritual impact he and Elaine have had as being the greatest accomplishment: on their two sons, Charles, Jr., and Christian; their five grandchildren; and the lives of many, many students.

“I am so humbled to look back at how things could have gone,” he said. “My decisions early on should have ended up in ruin. I shouldn’t have had the wonderful marriage I have now or have the two sons I have. I was so reckless at the beginning. In many ways, I’m such a crackpot, and also a cracked pot.”

Charlie serves as principal trumpet for the Dayton Philharmonic Orchestra and first trumpet for the award-winning Carillon Brass. He has also played with the Cincinnati Symphony, the Opera Orchestra of the Virgin Islands, and the Indianapolis Chamber Orchestra.

Located in southwest Ohio, Cedarville University is an accredited, Christ-centered, Baptist institution with an enrollment of 4,550 undergraduate, graduate and online students in more than 150 areas of study. Founded in 1887, Cedarville is recognized nationally for its authentic Christian community, rigorous academic programs, including the Bachelor of Arts in Music program, strong graduation and retention rates, accredited professional and health science offerings and high student engagement ranking. For more information about the University, visit www.cedarville.edu.