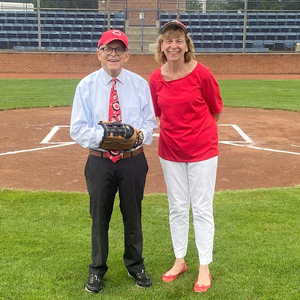 Ohio Gov. Mike DeWine started with a question: “How’s this going to be with no crowd?” he asked. “Are they pumping in noise?”

Yes, I told him as I sat in the parking lot at Great American Ball Park before Wednesday’s Reds exhibition game against the Tigers.

DeWine, who mandated masks statewide on July 22, hadn’t been able to watch the Reds on Tuesday but hoped to watch Wednesday night’s game. He was going to Cedarville University near his house Thursday to record the ceremonial first pitch for Friday’s game.

“I’m going to bring some of the grandchildren and see if I can throw it from Cedarville to Cincinnati,” he said. “The only other time I did this for the Reds, Opening Day about 10 years ago, I won’t say I threw a strike, but (Jason) LaRue caught it and it didn’t hit the ground. That’s my story anyway.”

“I’m going to bring some of the grandchildren and see if I can throw it from Cedarville to Cincinnati.”

To see the virtual first pitch, click on the link below: 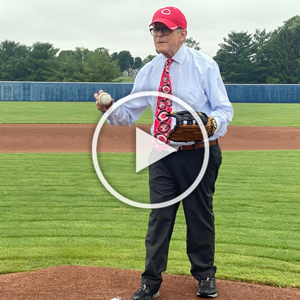 DeWine showed up at Cedarville University around 9:30 a.m. Thursday, July 23 to record videos for both the Cincinnati Reds and Cleveland Indians' home openers. He only recorded a virtual first pitch for the Reds, but provided a statewide greeting with enthusiasm for the return of baseball in Ohio. The home openers for the Reds and Indians were both on July 24. Cleveland hosted the Kansas City Royals, and the Reds played the Detroit Tigers.

Cedarville University baseball coach Mike Manes worked with the university's public relations team to coordinate the opportunity for DeWine. Manes, along with Pete Reese, interim manager for athletic grounds, Ken Carlton, groundskeeper, Bryce Hughes, a player on the Yellow Jackets' baseball team, and Steve Dennison, assistant baseball coach, had the field in game-ready condition for the governor. Not even a little rain could dampen the excitement for the start of the major league baseball season for the DeWine family members at Cedarville's Yellow Jacket Field.