Lorne Scharnberg boarded a plane for Texas and settled into the comfort of first class. His destination was a new job as President of a corporate subsidiary. The move from Minneapolis was not a popular choice at home, but to reach this executive level at age 32 was big. “I knew the significance of taking that job,” he said.

What Lorne didn’t know was the significance of being on that particular flight and just how uncomfortable it would be. That is until he saw a 50-something woman dressed in a business suit walk past him. “I knew instantly she was going to sit beside me, and I knew she was going to witness to me,” he said. “Nobody had to tell me.”

Just before the plane began to taxi, the woman reappeared from the back of the plane and sat next to him. He opened his briefcase and attempted to look busy. It didn’t work.

“I just have to interrupt you,” she said, grabbing Lorne’s arm. “I’ve really been led to speak to you about something.”

This was not in Lorne’s plans. He had a dream job, and he didn’t want the distraction. Besides, he had heard the Gospel explained many times growing up under the roof of a Pentecostal minister. “I prayed to get saved a couple times, but I never got saved because I didn’t ask for the free gift of salvation,” he said. “What I did was I promised God I’d never sin again. You don’t get saved doing that.”

Lorne knew he wasn’t saved, but job security was enough for him. So when she told him God had a perfect plan for his life, he responded, “I just became president of a subsidiary. It doesn’t get any better than that.”

She grabbed his arm and said, “I am so happy for you. But God’s got a perfect plan. As good as what you’ve got, it’s even better,” she said.

“I can’t visualize that,” Lorne said.

The woman couldn’t have known Lorne would build two successful contract manufacturing companies; serve as a trustee at Cedarville University; give generously of his time, treasure, and talents; and have the new School of Business Administration building named in his honor. But God’s plans were already in motion.

A few days after his unplanned meeting at 35,000 feet, Lorne’s wife, Kathi; young son, Mark; and his mother-in-law (who was just there to help with the move) arrived at their new home in Lake Jackson, Texas. Lorne’s career plans were coming together, but the conviction of the Holy Spirit was intensifying. It boiled over a month later while he was cutting grass in the Texas heat.

“The conviction got so bad I had to come into the house,” he said. “I knelt down in the formal dining room and said, ‘I can’t live like this.’ I went through all the instructions I could remember about how you became a Christian and accepted the free gift of salvation.”

When he told Kathi and her mom, the women cried with joy. Kathi, unbeknownst to Lorne, made a profession of faith as a high school senior at a Billy Graham Crusade at Fenway Park. Around the time of the move to Texas, she decided to finally live out her faith, and she and her mother began praying for Lorne.

“I couldn’t believe the reaction,” he said.

Lorne felt a peace he didn’t recognize. He expected his career to continue its momentum. But his short-term plans didn’t fit God’s long-term ones, and corporate upheaval resulted in a job loss.

Des Moines, Iowa, was the next stop. In 1984, Kathi and Lorne started Katecho, the contract manufacturing company he still owns, along with Surmasis Pharmaceuticals. Katecho is a world leader in producing hydrogel and builds innovative parts for medical devices, such as the pads for portable defibrillators. The business got off to a rough start, but Lorne was where he was supposed to be, and the business began to flourish in year two.

Lorne, however, had yet to hear about Cedarville. He believed in Christian education. Mark was growing up in a Christian school, and going to a Christian college was something the whole family desired for him. Cedarville was 600 miles away, but a neighbor was a student, and Mark was invited to join the family for Li’l Sibs Weekend.

Mark chose Cedarville for college and earned a business degree in 1997. Meanwhile, Lorne was asked to consider joining the Board of Trustees. He didn’t want to at first. “I’m not a joiner,” he said. But his mother-in-law and wife eventually persuaded him.

Lorne joined the Board in 1994, served three terms as Chair, and retired to emeritus status in 2018. He received the school’s 14th Medal of Honor in October 2019. As he sat in the chapel audience waiting to go on stage and receive the award, there were other announcements awaiting that had been kept secret from him for two years.

President Thomas White announced that the Scharnberg family had pledged $10 million toward a new business building. Lorne didn't know Mark — now President of Katecho and majority stockholder — was planning a large gift, and $10 million was far more than he thought Mark would have agreed to. Then Dr. White announced the building would be named the Lorne C. Scharnberg Business Center.

“I knew I was going to get an award,” Lorne said, “but the biggest shock of my life was to hear this.”

Lorne didn’t plan any of this. He often wondered — especially in those last days in Texas and the early ones in Des Moines — what would become of his business career. But he never forgot the words he heard on the plane about God having an even better plan for his life.

“In the back of my mind, I was convinced that maybe before I died what was told me — that because God is God, maybe it will come true,” he said.

Becoming a Christian opened Lorne to many ideas he had not considered, especially in giving. Tithing became important to him, and he taught Mark to do the same. But the commitment required to give $10 million started with a conversation he had one day on campus with fellow Trustee Bill Bolthouse.

Bill told Lorne he had divided his life into three parts. First: He learned his business from his dad. Second: He grew the business. Third: He was giving it all away to the Kingdom.

The first big thing Lorne gave away was the business to his son. Lorne still serves as CEO, but Mark is President and runs the business. When Kathi died in 2018, Mark took over the company finances and began to think about how the company could expand its giving.

Mark said this idea was life changing. He said he was led to give everything above a standard-of-living point. Being no longer compelled to increase his standard of living, the pressure to make more money disappeared.

“God’s given us a gift to be able to make money to be able to fund the gifts that He’s given other people,” Mark said. “If the business keeps growing, we’ll give more.”

“I’m called to give — I’m just not going to blindly give,” he said. “I want to give to those organizations that are very effective, and I feel like that’s Cedarville.”

Lorne knew his son was working on a plan to give toward the business building, but Mark never let his dad know the plan.

Lorne’s life, it seems, has never really gone according to his plan, but he’s grown to recognize that’s for the best. 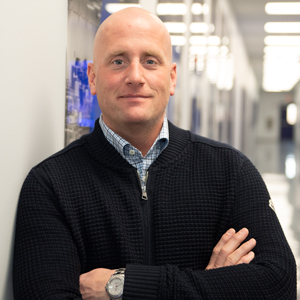 Mark Scharnberg ’97 works in manufacturing because he loves to build things.

The family companies he is President over — Katecho and Surmasis Pharmaceuticals — manufacture a variety of parts that find their homes on medical devices. “Building innovation for life” is the companies’ mantra. And innovation is at the heart of their business philosophy.

Mark sees similarities in the way his company operates and how Cedarville pursues its calling. He especially likes the discipleship emphasis of the 1,000 days initiative. To him, it’s an innovative way of putting everything together to educate and mentor Christian students.

Mark said two elements are required to build through innovation: talent and discipline. Finding the best talent gives his companies the ability to innovate. Discipline maximizes that talent.

Mark’s discipline is applied through simple rules that address his expectations of productivity, quality, and behavior. And the business has grown. The Scharnberg family gift of $10 million toward the construction of the Lorne C. Scharnberg Business Center is a byproduct of that growth.

Buildings are important to the Scharnbergs. Their facility in Des Moines, Iowa, is clean from the offices to the assembly lines to the warehouse. That’s important to a contract manufacturer whose success is dependent on securing contracts to produce goods for use by other businesses.

“When people walk into this business, I hear time and time again they’ve not seen a contract manufacturer facility this nice,” Mark said. “It sells itself.”

When Lorne Scharnberg became a Cedarville University Trustee in 1994, he soon developed a close relationship with the business department and its chair, Sharon Johnson. So it became natural that the Scharnbergs would give from the blessing of their business to help the School of Business Administration grow.

Jeff Gilbert ’87 is an Assistant Professor of Journalism at Cedarville University. He received his M.A. in journalism from Regent University.