From Seeking an End to a New Beginning 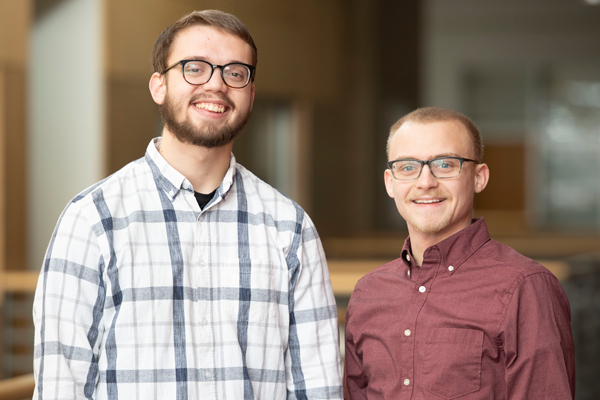 College is typically a stepping stone for someone to begin their professional career. But for Noah Flack, a rising senior broadcasting and digital media major with a concentration in audio production from Bowling Green, Ohio, going to Cedarville University saved his life.

Flack grew up in a Christian home and actively enjoyed defending his faith in middle school. While attending a private college prep high school, Flack began to drift away from his faith, and during his sophomore year, he ended a relationship with his girlfriend, which began an ongoing mental health battle.

This battle worsened during Flack’s senior year in high school. As Flack dealt with the typical senior pressures of finding a college and achieving good grades, he was also under stress to maintain a new relationship, while conflict arose between Flack and his mother for the first time in his life.

"Before I went to chapel or even signed in — really the moment I stepped out of the van — Cedarville felt like home."

These stressors led Flack to begin self-harming, and in October 2016 he attempted to commit suicide. His girlfriend found his note and was able to reach Flack before he harmed himself. Flack was then admitted to a psychiatric ward. Once released, he began professional counseling.

In the midst of this wondering, Noah visited Cedarville as part of his ongoing college search and knew instantly that Cedarville was the college he would attend.

“It was ironic because I really wasn’t much of a Christian at this point. But before I went to chapel or even signed in — really the moment I stepped out of the van — Cedarville felt like home,” described Flack. “At that time, I had no idea why, but I do now. It was the Holy Spirit knowing how Cedarville would change my life.”

When Flack started his freshman year at Cedarville he was very disillusioned, angry and depressed. He was ready to give up the little shred of faith he had left, but God had other plans for Flack. “A lot of friends came alongside me at Cedarville,” said Flack.

“Zach Stout, a friend on my hall, was one of the first people in my life that the Lord used to minister to me. Zach gave me his old, highlighted teen study Bible with a note that jump-started my faith. Through that, the mentorship of my resident assistant, and many other friends at Cedarville, I came back to the Lord.”

On February 5, 2018, Flack rededicated his life to God, and eventually he mended the broken relationship with his mother. Flack admitted that he still struggles with depression and anxiety. In March 2019, Flack suffered from a series of major panic attacks, during which he would hyperventilate to the point of passing out. But in the midst of this struggle, Flack also recognized there are far better days ahead of him through the faith he has in Jesus.

“The Lord has used Cedarville in such a drastic way to turn my entire life around,” explained Flack. “I can confidently say that if I hadn’t come to Cedarville I would probably be an atheist and might be physically dead. It is amazing to see how drastically things changed.”