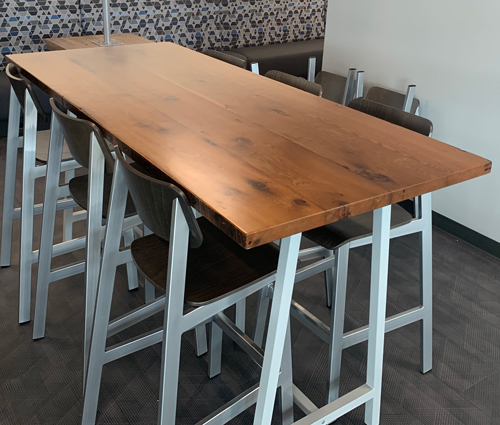 Catching up. Shootin’ the breeze. What’s the latest? Swapping stories is a common ritual at the dinner table. But for 2013 Cedarville alumnus Phil Kochsmeier, the stories in the table are as important as the ones around it.

Kochsmeier, owner of Maple Street Woodworking and a Cedarville resident, was contracted by Cedarville University last fall to build two 7-feet-long by 3-feet-wide tables for the new Chick-fil-A.

Kochsmeier’s creations, crafted from timbers at the old Cedarville Hardware store, were ready for customers during the restaurant’s dedication on Saturday, August 15, during Getting Started Weekend.

Cedarville Hardware, owned by Glenn Fawcett until his sudden passing in 2017, was purchased by the university from the Fawcett family in 2018. That building is now the Cedar Care Village Pharmacy, located at the corner of St. Rt. 42 and St. Rt. 72.

“People born and raised in Cedarville will be going to the Chick-fil-A, people in their 40s today who went to the hardware store with their mom or dad. Or people in their 80s who look at this wood as something that’s been around forever. It might remind them of friendships or a time when they took their grandkids to the store. When you start to think about it, it gets pretty overwhelming.”

In the process of recreating the hardware store into a modern-day pharmacy, a substantial portion of the old structure 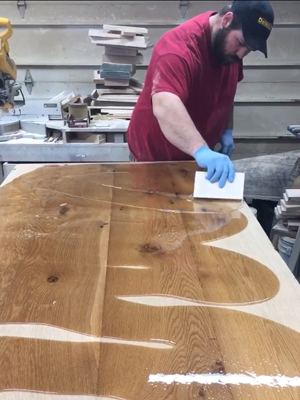 was removed, including floorboards and floor joists. That’s when Rod Johnson, Cedarville’s associate vice president for operations, had a vision for repurposing the 19th century rough-hewn white oak.

“As I looked at those oak boards, I wondered if there might be a way to use them,” Johnson said. “Then I thought about the new Chick-fil-A and realized we could probably use some of that lumber for tables. I love to re-use older, still viable building materials, and we had a chance to connect the old with the new.”

Dedra Wrigglesworth, manager of facilities services, knew the right person for that transformation. She had contracted Kochsmeier on two other occasions to build bookshelves for a vice president’s office and an end table for the human resources building.

“I thought he would do a great job turning the wood into a functional piece of furniture,” Wrigglesworth said. “I met Phil in September and showed him the pile of wood. He was able to salvage several long pieces and had enough material to make two large tables.”

Kochsmeier was humbled by the opportunity. “As you’re building this stuff, you start to wonder about who walked across these floors and what happened in earlier times,” he said. “I know it seems like a simple project, but there’s value in the stories behind the wood. To be entrusted with a project of this magnitude, this is a humbling thing. It gives me the chills to think about it.”

Kochsmeier, who was helped prepping the lumber by current Cedarville student Gus Dickson, believes the wood could be at least two centuries old. Cedarville Hardware was built in 1892.

“That building was constructed over 120 years ago,” he said. “That wood could have started as a sapling well over 200 years ago. That’s kind of fascinating to me.”

“It starts to open your eyes and your imagination,” Kochsmeier said. “People born and raised in Cedarville will be going to the Chick-fil-A, people in their 40s today who went to the hardware store with their mom or dad. Or people in their 80s who look at this wood as something that’s been around forever. It might remind them of friendships or a time when they took their grandkids to the store. When you start to think about it, it gets pretty overwhelming.”

One other story coming from the milled lumber involves a wall plaque that Kochsmeier made for Linda Fawcett, Glenn’s widow. Kochsmeier took some of the wood and made the plaque. His wife, Becca, a 2014 Cedarville alumna, wrote in calligraphy, “Bless this House.”

“I’m friends with Linda,” Kochsmeier said. “This plaque represents a piece of the hardware store and a reminder of her husband. That’s important.”

“Phil does beautiful work,” Fawcett said. “The tables are absolutely gorgeous. And the wall hanging he made is a real treasure to me.”