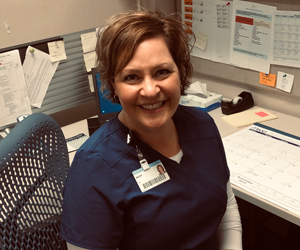 Due to many surgeries, Elaine Schulte of Grand Rapids, Michigan, has undergone frequent blood tests and blood transfusions, which has meant numerous needles inserted into veins, more than she cares to remember.

The 75-year-old retired nurse refers to herself as a “hard stick,” meaning that it’s difficult for medical personnel to find and successfully access a vein that will not collapse. So when she was at a hospital for an outpatient procedure in Grand Rapids earlier this year, she had a fair amount of anxiety. Until she found out her nurse was a graduate of Cedarville University.

“My heart sat down,” said Schulte, a retired missionary nurse to Africa, “which is an African expression of ‘calmed down,’ when my nurse said she was from Cedarville.”

“The most impactful part of my Cedarville education was looking at people with five-dimensional needs: physical, intellectual, emotional, social and spiritual. I see my patients as image bearers of God himself.”

Schulte was very familiar with Cedarville University. She attended Deaconess Hospital School of Nursing in Evansville, Indiana, and after graduating, enrolled at Cedarville in 1966. She graduated three years later. She also worked for Cedarville’s college health service, today’s University Medical Services, during her senior year, and came back to the university to work at the college health service from 1970 to 1975 before heading for the mission field. Schulte had not been in direct contact with Cedarville University since, until the moment she met Rachel Maki-Battey for a doctor’s appointment.

Maki-Battey graduated with a nursing degree from Cedarville University in 1997. “Cedarville challenged me and gave me a broad range of hands-on experience that pushed me to be the best nurse that I could be,” she said.

“The most impactful part of my Cedarville education was looking at people with five-dimensional needs: physical, intellectual, emotional, social and spiritual,” Maki-Battey continued. “I see my patients as image bearers of God himself.”

Hard stick patients often have a fair amount of anxiety about having blood drawn because medical personnel usually have to access their arms multiple times to find an accessible vein. Patients often come away from the experience sore and discouraged. Sometimes, medical personnel have not been successful at all.

“God has given me a skill and calmness in handling patients who have difficult veins,” Maki-Battey said.

In October 2019, Maki-Battey took her unique skill set to a new position as vascular access nurse serving two different hospitals in Grand Rapids, Michigan. Schulte was a patient at one of them, Blodgett Hospital located in East Grand Rapids.

“She was scared and had shared with me her difficult past,” explained Maki-Battey when explaining her first impression of Schulte. “She said very boldly that she wanted the best nurse.”

After a little banter back and forth, Maki-Battey and Schulte realized they had both lived in Ohio. Schulte also added that she had lived specifically in Cedarville. Maki-Battey told Schulte that she was a Cedarville grad.

“I was filled with an immediate peace,” said Schulte. “I know that grads of the nursing program from Cedarville are top notch.”

Maki-Battey didn’t have the same initial feeling. “I was so scared that she knew I was a Cedarville grad,” said Maki-Battey. “I immediately felt the pressure of not letting down my God and school by not performing well.”

Despite her apprehension, Maki-Battey started the IV with one stick. Schulte was dumbfounded and relieved.

“I am certain that the Lord sent her on my behalf that day,” said Schulte. “Having to have an IV started is so stressful for me because people so often fail and continue to stick me repeatedly. To have Rachel succeed on the first try was an immense blessing.”

Schulte and Maki-Battey both thanked God for bringing them together and allowing the IV to be started in one try.

“That experience pierced my heart as a reminder of a God who sees and cares,” said Maki-Battey. “He saw Elaine that day. He heard the prayers of His people. He was with me, and guided my hands to use the skills He has given me so that I may effectively love and care for those created in His Image.”

Located in southwest Ohio, Cedarville University is an accredited, Christ-centered, Baptist institution with an enrollment of 4,380 undergraduate, graduate and online students in more than 150 areas of study. Founded in 1887, Cedarville is recognized nationally for its authentic Christian community, rigorous academic programs, including it’s Bachelor of Science in Nursing and Master of Science in Nursing programs, strong graduation and retention rates, accredited professional and health science offerings and high student engagement ranking. For more information about the University, visit www.cedarville.edu.