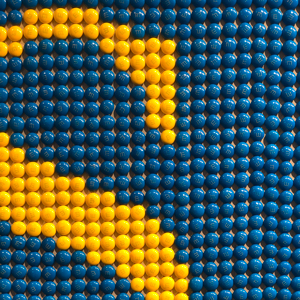 Contrast is a strategy used by artists to command a viewer's attention through the sheer force of difference. But rather than using light and colors, Cedarville University art professor Zac Benson, M.F.A., is using M&M’s to illuminate the contrast between the words of celebrity couple Kim Kardashian and Kanye West.

Benson’s art installation, which prominently features the words “Jesus is King,” is currently on display through February 27 at the University of North Alabama’s Gallery 126. The display is part of Benson’s current gallery show Zac Benson: Benson Sculpture. The artwork has generated interest on social media.

Benson’s inspiration for the piece came from West’s album “Jesus Is King,” released in October 2019, which proclaims Jesus will change your life. A few days after the album’s release, his wife, Kim Kardashian, surprised fans on Twitter when she praised the perks of microwaving M&Ms, insisting that the simple trick “will change your life.”

“Like many others in the Christian community, I praised God that he has come to a saving faith in Christ."

“The contrast between Kanye's statement and his wife's statement gripped me, and I knew I had to make a piece about the contrast in those statements,” said Benson. Benson’s piece, titled Kim Kardashian Suggests Microwaving M&M’s: “It Will Change Your Life,” is made of 20,000 M&M’s weighing almost 8 pounds. “I was intrigued by the recent news of Kanye accepting Christ and giving his life and music career to the Lord,” said Benson.

“Like many others in the Christian community, I praised God that he has come to a saving faith in Christ, just as I would with any new believer in Christ, regardless of who they are, where they've come from and what their background is.”

Located in southwest Ohio, Cedarville University is an accredited, Christ-centered, Baptist institution with an enrollment of 4,380 undergraduate, graduate and online students in more than 150 areas of study. Founded in 1887, Cedarville is recognized nationally for its authentic Christian community, rigorous academic programs, including its Bachelor of Art in Studio Art program, strong graduation and retention rates, accredited professional and health science offerings and high student engagement ranking. For more information about the University, visit www.cedarville.edu.