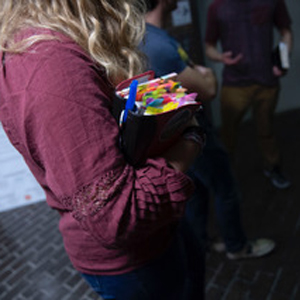 Before the outbreak of COVID-19, a group of Cedarville University students visited the Greene County Jail on Sunday mornings to spend time talking with inmates and building relationships with them.

Due to the health precautions this year, inmates are unable to talk with visitors face-to-face; they can only talk behind glass and over a phone. Cedarville students typically begin their jail ministry in October, and with COVID-19, they are planning to move to a letter-writing campaign in hopes of encouraging the inmates.

“We’re planning to write letters to the inmates and spend time praying together,” said Anna Hurt, a junior social work major who joined the team the first semester of her freshman year.

"They know that what they’re doing isn’t working, and they are so desperate for the hope of the gospel.”

Prior to the pandemic, students were able to sit on the floor on the other side of the bars and talk to inmates for a full hour. Each student individually talked one-on-one or with small groups.

“The people we talk with come from many backgrounds, so our ministry ranges from sharing the gospel to answering deep questions and analyzing passages of Scripture,” said Riley Fernandez, a junior in the biblical studies – accelerated program student, who has visited Greene County Jail since a friend invited him last year.

Hurt found the ladies at the jail to be much more open to the gospel than she had expected them to be. “The reality is that the women in the jail realize their need for something outside of themselves. They know that what they’re doing isn’t working, and they are so desperate for the hope of the gospel.”

“The women in the jail have been a beautiful picture for me of what the church is meant to look like,” Hurt added. “They don’t have to pretend like they’re perfect — they are aware that they have baggage and they want to work through it.”

One Sunday morning, some of the inmates that Fernandez spoke with weekly were not awake or ready to talk when he arrived, which was unusual. “Upon asking, the others told me that they were letting them sleep, as they had spent 11 hours the previous day reading the Old Testament so as to finish it before one of the guys was released,” he said.

Located in southwest Ohio, Cedarville University is an accredited, Christ-centered, Baptist institution with an enrollment of 4,550 undergraduate, graduate, and online students in more than 150 areas of study. Founded in 1887, Cedarville is recognized nationally for its authentic Christian community, rigorous academic programs, including its Bachelor of Science in Social Work program, strong graduation and retention rates, accredited professional and health science offerings, and high student engagement ranking. For more information about the University, visit www.cedarville.edu.