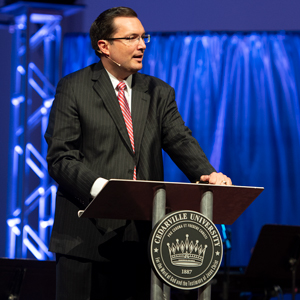 David Gibbs III, president and general counsel of the National Center for Life and Liberty (NCLL), will speak in chapel at Cedarville University on Wednesday, Jan 29. Chapel begins at 10 a.m. and is open to the public.

Gibbs serves as the president and general counsel for the NCLL, a legal ministry that protects the rights of Christian organizations and churches around the nation. He graduated from Duke University School of Law in 1993 and now manages the Gibbs Law Firm, speaking regularly at churches and conferences across the United States while also practicing as a trial attorney.

Gibbs has authored five books, including “Fighting for Dear Life” and “Understanding the Constitution.” Gibbs has argued before the United States Supreme Court and before federal circuit and district courts nationwide. He has also spoken at conferences such as the Shepherds 360 Church Leaders Conference.

According to his biography on the NCLL website, his personal mantra is: “If it’s wrong, fight it. If it’s right, fight for it.”