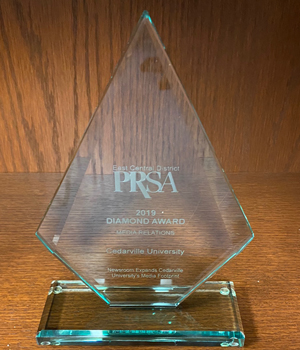 For the second time in less than 12 months, Cedarville University’s marketing and communications division received an award of excellence. Cedarville is the winner of the Public Relations Society of America (PRSA) East Central District “Diamond Award” for its campus newsroom.

Last May at the PRSA annual Prism awards ceremony, Cedarville was awarded a PRism Award and “Best of Show” by the Dayton Area PRSA chapter for its campus newsroom entry. This was the first “Best of Show” award in the university’s history.

“I am so appreciative to the administration for sharing the vision of this newsroom, our faculty for being willing to answer media’s questions and my colleagues for creating this great tool to share our stories.”

The vision for the campus newsroom, for the purpose of increasing Cedarville’s image and reputation through media interviews and academic videos, came from the 2017 PRSA International Conference in Indianapolis, Indiana. At the conference, Mark D. Weinstein, executive director of public relations at Cedarville, attended a session on campus newsrooms. Katie Neal, executive director of news and communications at Wake Forest University, was a panelist in the newsroom session and later talked with Weinstein about creating a newsroom facility on campus. A few months prior to the meeting, Wake Forest built an on-campus newsroom, and Neal was willing to share her best practices for building and implementing the facility.

“The PRSA international conference proved to be so valuable in terms of dreaming about the possibility of having a newsroom and connecting Cedarville faculty with media throughout the region and country,” said Weinstein. “I am so appreciative to the administration for sharing the vision of this newsroom, our faculty for being willing to answer media’s questions and my colleagues for creating this great tool to share our stories.”

After receiving approval by Cedarville’s administration, plans were quickly developed by a team of academic and staff communicators.

Lynn Brock, then the university’s dean of library services, offered space in Centennial Library for the newsroom. Several communications faculty and staff from the communication academic department, including Derrick Green, Jeff Simon, M.F.A., and Shawn Rifner joined the effort with ideas from an academic perspective. Rifner and Simon were key players is assuring the correct equipment was purchased and installed.

In the 2 ½ years since opening the newsroom, Cedarville faculty experts have averaged more than 150 television and radio interviews during an academic year. In addition, the marketing team has produced more than 100 academic videos from the facility, and the monthly radio program, "FYI," for WFCJ and WEEC radio stations are recorded and produced from Cedarville’s newsroom.

A result of the newsroom, which is largely managed by communication students, has been an extended exposure for Cedarville University. In addition to conducting media interviews with all of Dayton’s television stations, the newsroom has been used for interviews with stations in Columbus and Cincinnati, as well as Fox News, Fox Business News and CNN.