Nurses on the Frontlines

by Clem Boyd and Nicole Hackett '21

Three nurses. Three very different stories. Three individuals, all connected to Cedarville, with a heart to follow Jesus wherever he may call. Call he did, in the middle of COVID-19, and they responded.

When Rachel Hartley ’15, M.S.N. ’20 began working at Langone Brooklyn Hospital, she passed by a sobering reminder of why she left her job in Virginia to serve there: three tractor trailers in the hospital parking lot serving as temporary morgues for those who had died from COVID-19.

Prior to New York, Hartley was a preoperative surgical nurse in Lynchburg, Virginia. When the hospital stopped scheduling elective surgeries in mid-March, the caseload dropped, and so did her hours. About the same time, she began receiving emails from recruiters looking for nurses to help out in New York City, which had been staggered by the pandemic.

“From the moment I made the decision to call the recruiter and asked him about what they needed in New York, God confirmed this decision time and time again,” she said.

"God has gifted me to be a nurse, and in that calling He's placed on my life, I will find joy and satisfaction."

Instead of driving or flying to New York City, Hartley and her husband, Taylor, took to the sea. They piloted their own four-stateroom sailboat, Turning Points, from its home port in Virginia to Brooklyn. However, much like the cost of living anywhere in New York and its boroughs, marina fees were sky-high.

Hartley joined a Facebook group called “The Sailors of New York” and started asking about places to dock. “Within a half hour, they had put me in contact with a marina, and they instantly offered us dock space for free,” she said. “Normally, they charge $11,000 a month. God went above and beyond what I could have imagined.”

While the free dock space was an encouragement, the opportunity to serve was the greatest blessing — from praying over the phone with a family grateful for her care of their dying loved one to sharing her hope in Christ with beleaguered and weary co-workers.

“A Cedarville education prepares you to minister and to serve the Lord,” said Hartley, who completed her Master of Science in Nursing – Family Nurse Practitioner degree at Cedarville this fall.

She’s also certain that New York City was the place for her to anchor, until God called her to another COVID-19 assignment at Yale New Haven Hospital in New Haven, Connecticut, in June, and then to the U.S. Virgin Islands in October to work with the Federal Emergency Management Agency (FEMA). But wherever Hartley may dock, Jesus is her anchor. “God has gifted me to be a nurse, and in that calling He’s placed on my life, I will find joy and satisfaction,” she said. “I’m where He wants me to be.”

CRUSHED IN THE CONGO

Virginia Walker ’19, a Cedarville University nursing graduate, was nicknamed “Sunshine” by her nursing unit. This nickname perfectly describes how she shines Christ’s love to every COVID-19 patient she is currently treating in Inova Loudoun Hospital’s emergency room in Lansdowne, Virginia. 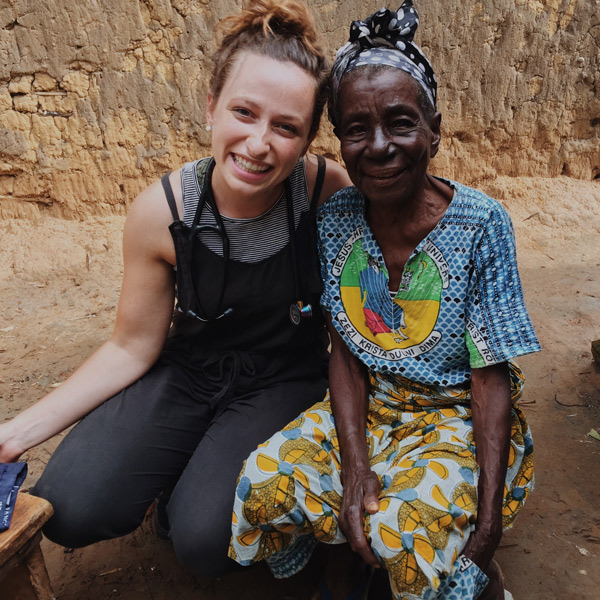 After she graduated from Cedarville and before starting at Inova, Walker served with a missionary couple in Impfondo, a tiny remote village in the northeast Republic of the Congo. The couple operated a 70-bed hospital with the help of less than a dozen Congolese nurses.

Walker was tasked with running the emergency room (ER) with one Congolese nurse. In the ER, Walker mainly saw patients struggling with the aftermath of Ebola and malaria, which kills almost half of the children under 5 years old in the village every year.

Shortly after arriving, the missionary doctor left to seek treatment for an ongoing medical condition. Walker became the only native English speaker in the hospital. A local translator helped her communicate with other staff members.

“There were so many people dying, and it was horrifying to me,” she explained. “The goodness of God I saw my whole life felt so out of touch with my reality, which allowed me to honestly wrestle through my faith.”

One especially hard case was a 6-year-old girl named Lili. Walker fought for Lili’s life for 12 hours straight, but in the end, Walker listened through a stethoscope as Lili’s heart beat for the last time.

“This pain hurts the Father so much that He was willing to come down to take that pain on Himself,” she related. “This is where God’s glory is seen. Not in thanking God for death and sickness, but in thanking the Lord for what He has done in light of His promise that one day this pain will end.”

"The Lord entered the world and took on every pain, endured, died for it, and defeat it so that all this pain, sickness, and death will one day end"

As COVID-19 began to increase in the states, Walker found the entire nation asking the same questions she had asked four months earlier in the Congo.

Through the coronavirus pandemic, Walker has seen the hearts of her co-workers soften toward the Gospel, and the Lord has provided numerous opportunities to share the love of Jesus with her patients. But Walker has also seen a strange connection between the virus and her faith.

“The Lord entered the world and took on every pain, endured it, died for it, and defeated it so that all this pain, sickness, and death will one day end!” she said. “That is worthy of praise.”

On March 24, Gabe Woodruff, M.S.N. ’21 was working diligently toward completing his Master of Science in Nursing – Family Nurse Practitioner (M.S.N.-FNP) degree at Cedarville. Two days later, he had joined his U.S. Army Reserve unit suddenly being deployed to Detroit, a hotspot for COVID-19. 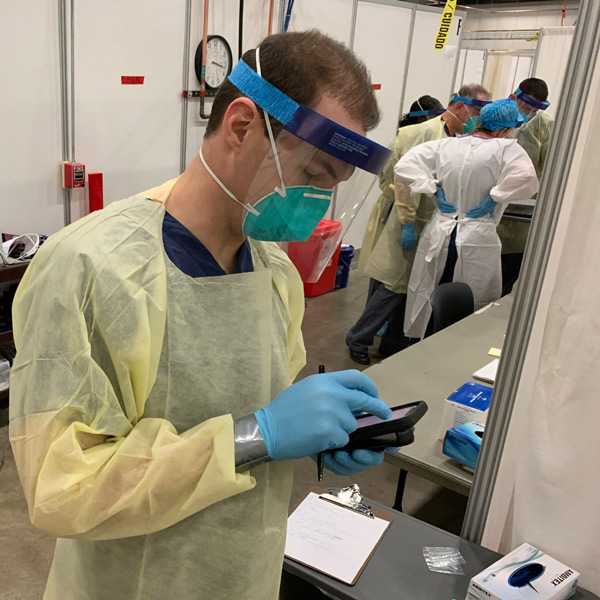 Woodruff and his unit cared for hundreds of overflow patients from Detroit hospitals at a 1,600-bed unit set up by the Army Corps of Engineers at the TCF Center, a convention facility downtown. The work was tiring, and the hours long, but he kept himself centered by staying in the Bible and prayer and with regular phone calls to his wife, Kayla.

Although Woodruff’s original orders had him on deployment for 400 days, or roughly 13 months, his unit completed their mission in two months. Good news for sure, but before he could rejoin his family, he would have to quarantine in Detroit.

“We were tested for COVID while we were still in Detroit and, thankfully, all 85 of us came back negative,” Woodruff said. “We were going to be quarantined in hotels for two weeks, but then we got a call from higher up after two days saying that since all of us were negative, we would be able to quarantine at our homes.”

Although Woodruff was grateful for the successful and swift completion of their mission, the sudden shift did have consequences. At the time of deployment, Woodruff was 128.5 hours deep into the required 200 clinical hours for his M.S.N.-FNP.

“I was faithfully going to clinicals, faithfully studying every morning, putting in the hard work, and then the deployment happened,” Woodruff said. “If I couldn’t finish my clinical hours, I’d have to retake the whole semester.”

Then he received an email from the American Association of Colleges of Nursing saying they had waived 75 of the 200 direct clinical hours; 125 was the new temporary standard.

In addition, the School of Nursing allowed him to finish the remaining three weeks of the academic part of the semester at any time and all his grades would count, so he wouldn’t have to retake spring classes.

“You have to pray and rest in the fact that God is in control,” he said. “One of the things Kayla and I would tell each other is, if we trust God with our eternal security, why wouldn’t we trust Him with our present circumstances?”

“Jesus has always been faithful to us, and we knew He would continue to be. In Him, we had peace.” 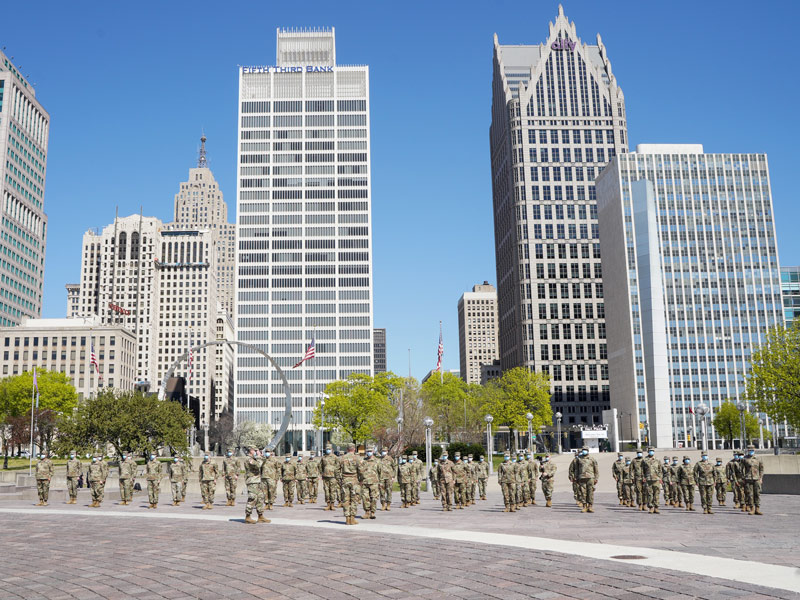