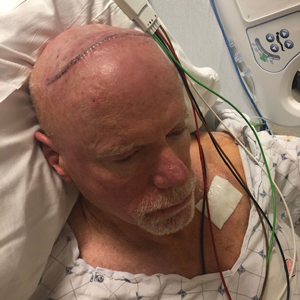 After years of debilitating tremors and muscle spasms from Parkinson’s disease, one Cedarville University professor found life-changing relief this summer that has him playing guitar again for the first time in seven years.

On June 24, Dr. Bill Ragle, professor of finance, underwent a surgical procedure known as deep brain stimulation (DBS) at the University of Cincinnati Medical Center to minimize his symptoms from Parkinson’s disease.

Two of the hallmarks of Parkinson’s are tremors and dyskinesia, involuntary muscle movement characterized by erratic and unexpected facial, arm, or leg movement.

The surgeon drilled two holes in Ragle’s skull and placed electrodes deep in his brain that are wired to a battery pack placed in his upper chest.

"I want to trust God to let him receive glory the way he wants to be glorified. In many cases, affliction is what God uses to make us trust him more.”

“This battery pack is constantly sending 1.6 volts to my brain,” Ragle said. “Though not a cure, this has provided me with a very high degree of reprieve from my symptoms.”

There have been no negative side effects from the surgery.

“From the time that I was diagnosed with Parkinson’s, I haven’t been able to play guitar since my son’s wedding in 2013,” said Ragle. “Now, I’m able to play again. It took me a couple of weeks to bounce back from such a major surgery, but it’s been a very good recovery.” 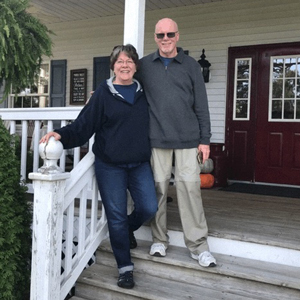 Ragle heard about the surgery last December from his daughter-in-law. He and LuAnn, his wife of 34 years, prayerfully considered the option as his symptoms worsened over time.

“We prayed about it for several months, and Bill had to go through extensive testing to be sure he was a candidate for DBS surgery,” LuAnn noted. “We asked the Lord to stop us at any point if surgery was not his will, but Bill passed all of the testing with flying colors, so we just kept going.”

As a result of the operation, Ragle’s physical quality of life has greatly improved, and he has been able to engage in many activities that he was not able to before.

“Before surgery, his constant tremors caused him to lose 15 pounds in one month, no matter what I fed him, and his energy levels were very low,” LuAnn shared.

Throughout his medical journey, Ragle has strived to seek God’s will above all else.

“After my diagnosis, my wife and I went through a year of mourning,” Ragle shared. “Eventually, the question came to me: Which of these things brings more glory to God? Healing me from a debilitating disease or having the world watch me cling to him as I walk through it? I want to trust God to let him receive glory the way he wants to be glorified. In many cases, affliction is what God uses to make us trust him more.”

Ragle and his wife are incredibly thankful for the comfort and support provided by their faith community at Grace Baptist Church, located in downtown Cedarville.

“We could not have made it through this without our faith,” LuAnn said. “Our church community was great. We were so supported by prayer, and we both know that was what made the difference.”

As Ragle reflects on his experiences with Parkinson’s, his primary goal is to praise God and follow his plan.

“It’s what I said to my church when I spoke in September: ‘You prayed, God answered. So I want to be careful in giving him the glory,” Ragle said. “What I’ve received is not a cure, but I’ve decided however God wants to use me in the future to glorify himself, count me in.”

Located in southwest Ohio, Cedarville University is an accredited, Christ-centered, Baptist institution with an enrollment of 4,550 undergraduate, graduate, and online students in more than 150 areas of study. Founded in 1887, Cedarville is recognized nationally for its authentic Christian community, rigorous academic programs, such as the Bachelor of Science in Finance program, strong graduation, and retention rates, accredited professional and health science offerings and high student engagement ranking. For more information about the University, visit www.cedarville.edu.